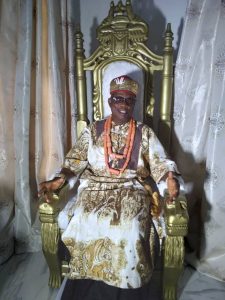 The attention of the Obi of Idumuje Ugboko, HRM Agbogidi Solomon Eziokwubundu Nwabuokei Nwoko, has been drawn to the series of rumours and online propaganda emanating from the family of Okey Ifejoku insinuating that some persons in his kingdom are still being prosecuted as a result of land deals.

The palace in a statement signed by Mr. Fred Akpewe, the Media Aide to the Obi of Idumuje-Ugboko, HRM Obi Solomon Eziokwubundu Nwabuokei Nwoko stated that the best of the knowledge of the Obi, no one is in police custody or is being arraigned as a result of land deals in his kingdom.
He pointed out that the only remote issue relating to land dispute is a civil case involving one hectare of land between Prince Chukwunonso Nwoko and the Banyes.

The statement stated: “The Obi of Idumuje Ugboko is, however, aware that there are ongoing criminal prosecution for alleged terrorism and murder of persons arising from the May 18th to 25th attacks and destruction in Idumuje-Ugboko which is now popularly referred to as the 2017 mayhem in the community. Those currently tried for alleged terrorism and murder in a Federal High Court Abuja are Dennis Uwadiegwu Nwoko, Ndudi Chijiume, Nwochie Agiliga Light, Raymond Omosiele, Adim Nwafor, Okey Ifejoku, Azuka Mukolu, Ejimofor Nwoko. Others are Omoye Esonye, Aikhomo Omezi, Sir Godwin Akaba Aniemeke and Emeka Oyibundu.

“Some of the above persons have been granted bail while a few others are still perfecting their bail conditions. Instead of the aforementioned persons to defend themselves in court for the charges against them they are claiming that they are being arraigned as a result of land issues.
“By this they falsely and maliciously alleged that their arraignment is at the instance of Prince (Dr) Ned Nwoko, the Chancellor of the proposed Stars University in Idumuje-Ugboko.
HRM Agbogidi Solomon Eziokwubundu Nwabuokei Nwoko wishes to clarify that the arraignment of certain persons mentioned above have no bearing whatsoever with land issues. As a matter of fact the victims of the 2017 Idumuje-Ugboko mayhem are the complainants together with their witnesses in the murder of Cyprian Kumiolu and Kennedy Iloh.

“Specifically, Okeh Ifejoku and others are being prosecuted for the alleged murder of Cyprian Kumiolu.
“The above clarification has become necessary to set records straight in view of distorted facts concerning the arraignment of person in a Federal Court in connection with terrorism and murder charges,” Akpewe stated.