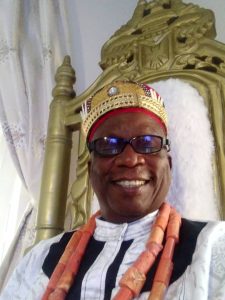 By Isaiah Omenwa
Delta Fresh Vision is of the view that the Delta North Traditional Rulers Committee has made history by transmitting a letter dated 20 th April, 2021 to the Delta State Governor requesting government to recognize and present a staff of office to HRM Obi Solomon Eziokwubundu Nwabuokei Nwoko.

In their historic meeting held on the 19 th of April, 2021 under the chairmanship of HRM Obi Francis Ijei (JP), Obi of Issele-Azagba Kingdom, the outcome of which was sent to the Delta State Governor, they stated inter alia:
1. That the extant customary law regulating succession to the throne of the traditional ruler and king, Obi of Idumuje Ugboko Kingdom is by primogeniture.

2. That based on presentation on the history, native law and custom of Idumujem Ugboko, HRM Obi Solomon Eziokwubundu Nwabuokei Nwoko is the person in Idumuje Ugboko Kingdom, under proper application of the rules of hereditary/primogeniture system of succession qualified to occupy any immediate vacancy in the traditional ruler/Obi title of Idumuje Ugboko Kingdom.

3. That HRM Obi Solomon Eziokwubundu Nwabuokei Nwoko be and is hereby recommended for approval and presentation of staff of office by the Government of Delta State.

4. That the letter supersedes all previous correspondents in the matter.

The letter which was personally signed by HRM Obi Francis Ijei, Obi of
Issele-Azagba Kingdom on behalf of other committee members has put paid to the speculation that the committee had repudiated their earlier letter transmitting same to the Delta State Governor.

The significance of this historic development can only be appreciated against the backdrop of the seemingly intractable four-year-old kingship tussle in the agrarian community of Idumuje Ugboko that defied eight peace settlement committees, leaving in its wake, painful deaths, destruction, anguish, suspicion and the international labeling of the town as a crisis ridden community.

We believe that the Delta State Government will do the needful and bring a smile finally to the faces of Idumuje Ugboko people who for long have lived in fear of terror.
• Isaiah Okenwa is Delta Fresh Vision’s Director of Media and Communication