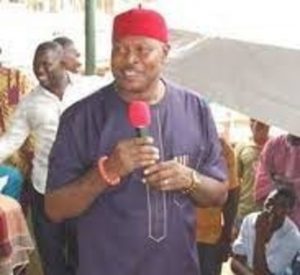 A former council chairman in Delta State, Chief Jaunty Okwudi  has dismissed comments trailing Governor Ifeanyi Okowa’s statement that there was no written agreement on rotation of the office of the governor entered into by politicians in Delta State.

Governor Okowa while answering a reporter’s question during his Quarterly Media Interaction with journalists, on whether there was a written agreement on rotation by politicians had hinted that to the best of his knowledge, there was no written agreement. The statement has since generated heated debates in political circles in the state.

However, Chief Okwudi, one time chairman of Aniocha North Local Government Council, who walked into the office of Delta Online Publishers’ Forum (DOPF), Asaba, lat Thursday bared his mind on the controversy, saying: “There is absolutely no reason for any person to get worked up because of what the Governor said,” pointing out that what Governor Okowa said is in the best interest of the entire Deltans. “It is in the best interest of the economic and political development of Delta State,” he contended.

Arguing his position, Chief Okwudi said: “The Governor has recently stated that even though there was an understanding that power as regards governorship in Delta has to rotate between the three senatorial districts in the state. Well, to me, it is not justisciable since there was no agreement that have been signed as for you to go in to litigation.

“It is only when there is an agreement that you can now begin to assert right and claim damages of whatever. In this case, there was nothing of such. He said that, that arrangement was to ensure justice, equity and fairness. It is a matter of what is equitable and what is fair enough so that no section of Delta State is marginalized, and he went ahead to also say that whoever must be Governor of Delta State must see Asaba, the State capital as his own constituency and not some persons who will see Asaba as a misnomer.

“Of course, Asaba is the capital of Delta State and we must see Asaba City as such. So if anybody is aiming to become Governor of Delta State, you must, therefore, have the capacity; you must see yourself as somebody coming from the entire communities of the State, since you are coming to govern the entire Delta State.

For Chief Okwudi, it must be understood clearly that Asaba, being the seat of power in the state must be recognized and respected as such. This, he said, must be visible in terms of the quantum of development projects necessary to showcase Asaba as the state capital in its most favourable setting.

Okwudi said: “When coming into Delta State, the first port of call is the capital city. Will you now neglect the capital city and then go and begin to put white elephant projects in communities where probably goats, fishes and mosquitoes reside? It shouldn’t be.”

Commending Governor Okowa’s equity and fairness disposition, Okwudi said: “Even though the Governor is from the Delta North extraction, where the capital territory is also located you will understand and agree with  me that development projects, both social, economic, whatever including schools, health, all sectors of human development are scattered across all communities of Delta State. That is true.

“There is no community in Delta State that has not benefitted from one project or programme of the Delta State Government under His Excellency Senator Dr. Ifeanyi Okowa. We haven’t seen it before and then the achievement, the monumental development that has taken place in the last six years in Asaba and Warri area alone, these are all unimaginable.  Who would have imagined that Delta State could muster such funds as to be able to put it in any of such projects that will give Delta State a facelift? Asaba has a face lift, Warri has a face lift; not to talk of all the communities that are benefiting from DESOPADEC projects, you see how developments are spread across Delta State.

“For that, we as Delta  Northerners in particular, and of course, Deltans in general, there is no way we cannot come together to support His Excellency the Governor, Senator Dr. Ifeanyi Arthor Okowa to finish strong and then hand over power to a governor that seemingly have the capacity to govern Delta State,” Okwudi said, adding that “For you to have the capacity to govern Delta State, you must have an open heart, and know what is expected of you as a Governor and not a sectional Governor. So, for people to want to unduly influence the incumbent governor to tilt the governorship to some persons because they must have a particular somebody in mind. You cannot force anybody as governor on Deltans.”

Okwudi continued: “What His Excellency have also said, that he is not God, he wouldn’t be able to determine who becomes the Governor, that he will leave that for God to decide as power comes from God and God alone, and when the time comes we cannot pretend that we are not politicians. Of course, as politicians when the time for politics comes we must play our role as politicians and the role we are going to play is to ensure that we have the capacity Governor who will follow the footsteps of the incumbent Governor and work even more than His Excellency the Governor and do right to all manner of people just as Senator Okowa is doing presently.”

“So for me, just as Governor Okowa has stated, we can only do what is fair and equitable and don’t forget that what we are going through is democracy.

“If an Ijaw man is able to contest against the back drop of the fact that the Delta Central people want to be, they feel it is their turn and the Ijaw man wants to contest and majority of Deltans, give him ticket to go, will you stop him? Of course, it will not be possible to stop them because even when Okowa was contesting as Governor, we also had people from Delta Central contesting with him.

“Infact Edevwie contested with him and he came second. Suppose Edevwie had won the ticket will you say you had a gentleman agreement for Delta North to become Governor and then Edevwie wins, would you have said to Delta North people Edevwie will not be Governor? There is nothing you can do; the man who wins the election, takes the ticket, that is the way it is.

“So long as you won’t be able, nobody according to democratic norms and principles, so long as you do not stop all the other people from ethnic group or senatorial districts from contesting, you will then leave it to be subjected to democratic process and the end result of it will be whoever that wins the majority of the votes that person takes the ticket.

“So I am not surprise that people from Delta South with particular reference to the Ijaw ethnic nationality, want to be governor. Of course, you cannot denial them that right. Everybody has the right to aspire to the highest office of Delta State. So you cannot stop them except there have to be a fresh agreement again. That is to say that such agreement if it stipulates that when zoned to Delta Central, South and North must not aspire. I am sure that has not been done.”

Chief Okwudi pointed out that since that has not been done,“It therefore pre- supposes that the seat is still open for anybody who cares, to contest.”

He continued: “I am sure that if it is not God’s grand design, if it were not God who had designed it, that Okowa will be governor in that year, perharps, Edevwie would have won even though you are saying there was a agreement for Delta North to rule.

“So if you know that it is being zoned to a particular senatorial district, then there has to be also part of their agreement, which should be put in place to discourage people from other two senatorial districts from contesting. So let’s call a spade a spade.”

How we plan to restructure Nigeria after May 29, by Atiku