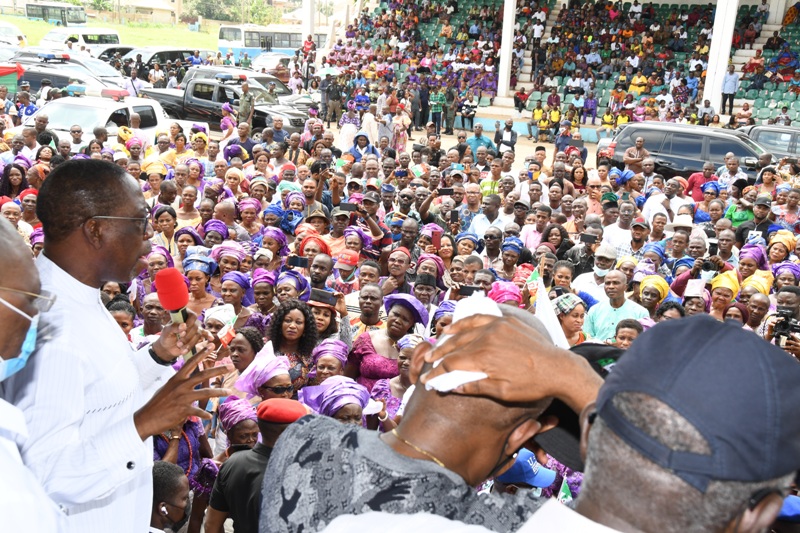 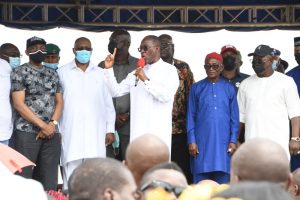 With the above words, Mrs Franca Anigbogu, a former woman leader of the All Progressives Congress (APC) in Aniocha-Oshimili Federal Constituency, Delta state threw away the broom to underscore her dumping of the APC and exchanged it for the umbrella, the symbol of the Peoples Democratic Party (PDP).

The event happened today, June 24, 2021 at a well attended barnstorm where hundreds of former APC faithful led by their notable leaders, Chief Paul Adingupu and former Delta North senatorial chairman of the party, Major Okafor (rtd) dumped the APC and embraced the PDP.

Governor Ifeanyi Okowa was joined by other PDP leaders in the state as well as members of the National Assembly, led by the Minority Leader of the House of Representatives, Rt. Hon. Ndudi Elumelu, the Speaker, Delta State House of Assembly with other members of the House.

The visibly joyous Governor Okowa said he would not be distracted by attempts by some highly placed members of the Peoples Democratic Party (PDP) in the state to pitch him against his predecessors.

Receiving the defectors to the PDP, the governor said all governors who ruled the state since 1999 performed very well, pointing out that the attempts by some persons in the state to put him on a collision course with past leaders of the state would not work as he was focused on developing Delta according to the mandate freely given to him by people of the state.

“We also believe that power belongs to the people and that the people reserve the right to make their choice.

“Sometime ago, I said that power belongs to God and that only God will determine who will succeed me. I wonder why some people are angry about that statement because truly, only God knows who will take over from me.

“We are one family in the PDP and those who don’t have our character are angry because we always say the truth and they are trying all means to scatter our PDP family, but they will always fail because we have bonded very well together as a party.

“Together as a family, we can continue to make things happen; together as a family we change things in our family by working hard for everyone. We will not work to put money in one person’s pocket, because a day will come when I will expose those of them that are angry with us,’’ the governor said, adding that “you voted for me to do what is right for the interest of the people and not to put money in somebody’s pocket; that’s not what you voted me for.”

“If anyone says he is not seeing what we are doing, it’s either that they are blind or they don’t live in Asaba.

“I am building on the foundation that I met. Some people are angry and want to cause quarrel between me and my predecessors but they have failed because no stranger will deceive us in this state.’’

He commended the people for their support over the years, adding that the coming of the defectors from APC would further strengthen the PDP in the state.

“I congratulate all of you returning home today; by the grace of God, the people will be happy with us by the time we will be handing over in 2023,” Okowa stated.

Esiso said: “Under their leadership of this nation, bandits have taken over, prices of food have skyrocketed, farmers can’t go to farm and children can’t go to school because of insecurity.

“They are dreaming and can’t see Delta. They can plan, they can gather, but they will scatter because God is with us.

“The party under my leadership will not tolerate any irritant. We will chase them till they meet their end politically.

“As a party, we take decisions in the best interest of the party and I want to reiterate that Senator Peter Nwaoboshi stands suspended and he must decide where he belongs; he has one month to do so or we will be forced to do the needful,” Esiso stated.

Earlier, Chairman of APC in Delta North, Major George Okafor (rtd), who led the defectors, had said he effectively resigned from the APC on Tuesday, June 22, 2021 and that they were back to PDP where they truly belonged.

Major Okafor said:”My decision to quit the APC was largely borne out of my inner convictions that APC in Delta has remained an unending battlefield without hope for respite.

“In APC in Delta, things will continue to fall apart; I do not see them coming together even beyond 2023.

“Today, I feel good coming back home to where I am loved, respected and appreciated. I thank the PDP family in Delta State for holding forth and firm since 1999.

“I want to specially thank His Excellency, the Governor, for keeping the party together, both in the state and at the national level,” Okafor said.

Chief Paul Adingupu whose entry into the capacity filled Cenotaph venue of the defection was received with loud ovation, lamented that the APC introduced banditry into Nigeria.