The crossing over of Senator Peter Nwaoboshi (Delta North) to the ruling All Progressives Congress (APC) has been acknowledged as good riddance to bad rubbish.

PDP in Delta State dismissed the legislator’s crossing over to APC, saying it is just to address the senator in borrowed robes.

WILD JUBILATION IN PDP AS NWAOBOSHI JOINS APC IN IGNOMINY

The Peoples Democratic Party (PDP) in Delta State has dismissed the claims that Senator Peter Nwaoboshi decamped from its fold as untrue as he has already been suspended.

The party in a Press Release signed by its State Publicity Secretary, Dr. Ifeanyi M. Osuoza described the claims of decamping as trying to address Nwaoboshi in borrowed robes, which he does not deserve having been earlier suspended for anti-party activities.

Dr. Osuoza said: “We wish to state categorically for the avoidance of doubt and also to set the records straight, that Senator Peter Nwaoboshi had already been duly suspended by the State working Committee of our party, following his recent romance with an opposition party, his verbal recklessness, and unprovoked utterances against the person of His Excellency, Senator, Dr. Ifeanyi Okowa, Governor of Delta State.

“Those unbecoming attitude of the Senator exposed him as indecorous and lacking discipline which the PDP cherishes so much. The party had to quickly rise to the occasion by treating him like a mad cow in the china shop and manage his exit through suspension so as to save the soul of the PDP in the State.

“His inevitable exit, therefore, has left a wave of joy in the party as faithful and loyal party members see the move as good riddance to bad rubbish.

“Indeed, the PDP having noticed the undisguised footsteps of Nwaoboshi in hobnobbing with the opposition party in betrayal of the goodwill given to him by the PDP through which he became a Senator had watched with bated breath how Nwaoboshi exposed himself as an ingrate and worked with the opposition to undermine and backstab the PDP that brought him to national limelight.

“During the period of Nwaoboshi’s flirtations with the opposition, he betrayed the people of Delta North with below par representation and never showed interest in matters that concerned them as they cried out against insecurity and open grazing that has left the largely agrarian communities rather prostrate and helpless in the hands of marauding and murderous herdsmen.

“He denied the people their voice which he had in the Senate, all in a premeditated move to feather his own nest to the detriment of the people he claimed to represent.

“Nobody is weeping over the exit of a man that was clearly guided out of the PDP to prevent the party from being infested with his bad and unseemly manners.

“For us, in PDP, Nwaoboshi’s movement remains good riddance to bad rubbish, considering his numerous corruption cases, after all, he has gone to a party that its former National Chairman once called out that; “all those suffering from corruption should cross over for succour and their ‘sins’ shall be forgiven.” We wish them good luck in the marriage of the compatible.

“We call on all PDP faithful, supporters, and members, to remain calm and go about their duties in peace.” 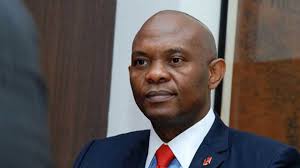