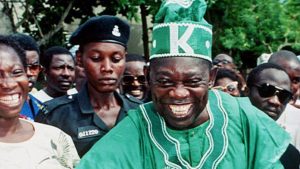 It is undoubtable that the historic June 12 election of 1993 was a dark chapter in Nigeria’s chequered political history, but we shouldn’t lose the lessons as we build our democracy to greater heights.

In a statement on the occasion of 2021 Democracy Day, Atiku said: “ I’m proud to join Nigerians in the celebration of this important day in our recent political history not only because I was part of those challenging moments, but also because of my unshaken belief in democracy.

“Although the annulment of MKO Abiola’s election was a major setback, my consolation is that it made Nigerians more united to resist dictatorship and entrench democracy.

“The illegal cancellation of the results of the 1993 presidential election was not a personal loss to Abiola, but a loss to Nigeria and its democracy.

“Abiola, whom I stepped down for in the 1993 primary of the Social Democratic Party (SDP) in Jos, was a good man, and his only primary reason for joining the race was to offer selfless service to the ordinary Nigerians. I was deeply pained by the circumstances in which he was arrested and eventually died in government’s custody. Such gross injustice was unspeakably cruel.

“Sadly, the opportunism of some Nigerian politicians had contributed to the destruction of democracy, most of those who aided and abetted General Abacha’s self-succession agenda were politicians.

“The most important lesson on June 12 is that we should be united in the defense of democracy and resist the divide and rule tactics of the enemies of democracy.

“Once again, I wish Nigerians a memorable celebration.”

PERSPECTIVE – Senator Peter Nwoboshi and the paranoiac syndrome of APC political refuge:  A metaphor of clean water in a leprous hand