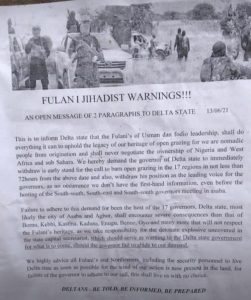 A cruel, brutal and murderous group that lacked the courage to identify itself but only introduced itself as the”Fulani of Usman Dan Fodio leadership,” has declared that it is on the prowl in Delta State. The masked group in a mad effusion threatened to unleash mayhem on Delta state in its bid, it impudently described as upholding its legacy of open grazing.

The group, which calls itself “nomadic people from origination” (sic), made this known in an anonymous write-up it pasted on walls around Asaba, Delta State capital.

In the notification of its evil plans, entitled: “Fulani Jihadist Warning!!!, An Open Message of 2 Paragraphs to Delta State,” and dated 13/06/2021, the group said it was demanding that Governor Ifeanyi Okowa of Delta rescinded his earlier call on ban on open grazing.

The statement, warts and all reads: “This is to inform Delta State that the Fulanis of Usman dan Fodio leadership shall do everything it can to uphold the legacy of our heritage of open grazing for we are nomadic people from origination and shall never negotiate the ownership of Nigeria and West Africa and sub-Sahara. We hereby demand the governor of Delta State to immediately withdraw is early stand for the call to ban open grazing in the 17 in not less than 72 hours from the above date, and also withdraw his position as the leading voice for the governors, as no occurrence we don’t have the first hand information, even before the hosting of the South South, South East and south south governors meeting in Asaba.

“Failure to adhere to this demand for been the host of the 17 governors, Delta state, most likely the city of Asaba and Agbor, shall encounter severe consequences than that of Bornu, Kebbi, Katsina, Kaduna, Enugu, Benue, Oyo and many more that will not respect the Fulani heritage, as we take responsibility for the detonate explosive uncovered in the state capital secretariat, which should serve as warning to the Delta state government for what is to come, should the governor fail to abide by our demand.

“We highly advice all Fulani’s and Northerners including the security personnel to live Delta state as soon as possible for the wind of our action is now present in the land, for failure of the governor to adhere to our call, this shall live us with no choice.

“DELTANS BE TOLD BE INFORMED BE PREPARED,” the statement concluded.