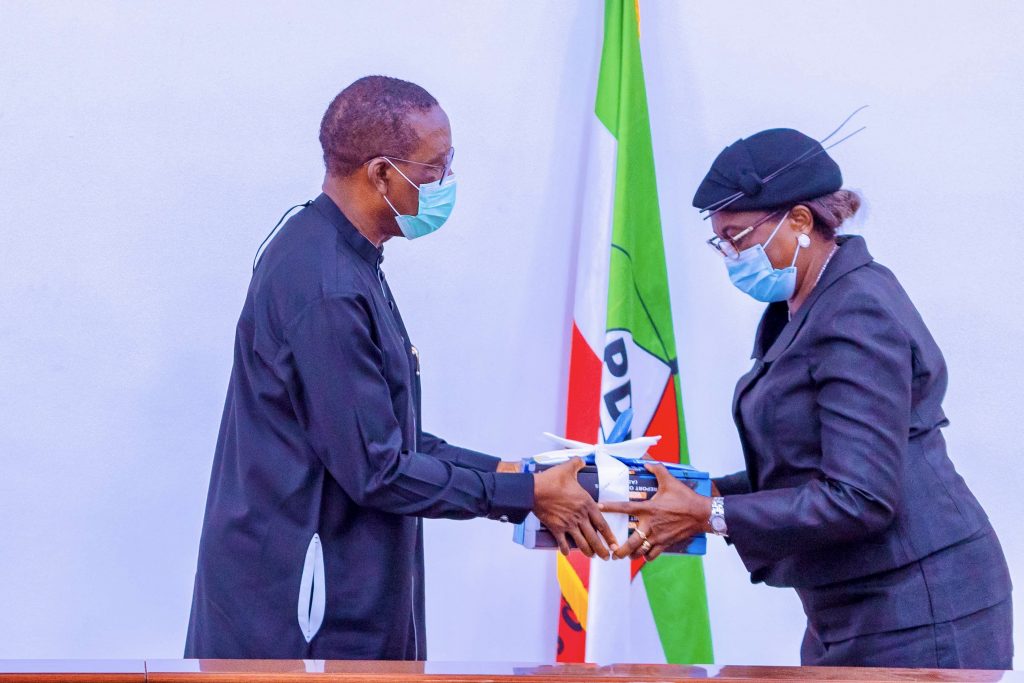 Delta Governor, Sen. (Dr) Ifeanyi Okowa, on Friday said the state government would do its best to support families of victims of police brutality and extra-judicial killings in the state.

He spoke while receiving the report of the State’s Judicial Panel of Inquiry into complaints of police brutality and extra-judicial killings in the state, at Government House, Asaba.

The governor said that his administration would consider and implement the decisions of the panel and urged the police to see the civil populace as partner in intelligence-gathering rather than antagonists.

He assured that the recommendations would be looked into by the State’s Executive Council, and that justice would be done as much as possible.

He pointed out that no amount of monetary compensation would bring back lost lives and advised the Police to always be cautious when dealing with human lives.

“We are all very much aware of the impact of ENDSARS in our country. It opened a new chapter in the history of our country, where it became very obvious that many of our citizens across the nation were suffering silently.

“Many of them were in real pains, rising from loss of loved ones or loved ones that have been maimed by the Police.

“Rising from several stakeholders meetings, we decided that all states should constitute judicial panels of enquiry, for which Delta state constituted one,” the governor said.

He thanked the Chairman of the panel and members for their painstaking effort in the discharge of the assignment, adding that he was glad that Deltans came out to lay their complaints before the committee.

“I want to reassure you that the recommendations made will be looked into very urgently by the state executive council and that justice will be done to the best that we can as human beings.

“We can not bring the dead to live and no amount of money can buy a soul. However, we will do the best we can to sympathise with the families and victims.

“The fact that we have accepted that something went wrong could help the families heal and we need to lend a helping hand to them.
I do pray that we continue as a people to stay very civil.

“A lot of Police officers do their work the way it ought to be done. But it’s unfortunate that some few take laws into their hands and treat people they were supposed to protect as if they ought not to exist.

“That’s not supposed to be so; human lives can only be created by God. So, as much as possible, it is necessary to give respect to that life which we cannot create.

“I was waiting to see the report and know the extent to which our people have really suffered in the hands of security agencies before setting up the human rights complaints team.

“Whatever is being done is not to scrap the Police because we believe that many of them are doing their jobs. In fact, we have to find way to strengthen and encourage them,” he stated.

The governor added that it was not unknown that in Nigeria, many policemen work in difficult circumstances, sometimes without equipment to be able to effectively do their jobs.

He, however, said that such situation did not give room for people to abuse their offices.

“Therefore, we advise the security agencies which tend to give a bad name to the Police Force and other agencies to desist from doing that.

“I believe that when the police work with the civil class, it will help them in information gathering.

“So, we look forward to a good working relationship of both the government and the police itself in order to provide better policing of our nation without having to go the path that will make our people distrust us,” the governor stated.

Earlier, Chairman of the Judicial Panel of Inquiry, Justice Celestina Ogisi (rtd), had presented the panel’s report and thanked the governor for finding the members worthy to serve.

She recalled that the Panel was inaugurated on October 9, 2020, to receive and inquire into complaints of police brutality and extra-judicial killings in the state, evaluate evidence presented and draw conclusions as to the validity of the complaint(s), and recommend compensation and other remedial measures.

According to her, the Panel commenced work immediately after inauguration by calling for memoranda from interested members of the public and held public sitting at Asaba and Warri.

“In total, the Panel received 86 petitions and 49 were heard on merit while 37 were struck out for various reasons.

“The Panel also received 10 petitions which sought the enforcement of judgments of various High Courts of the State against the Police for acts of Police brutality and extra-judicial killings.

“The Panel recommended the payment of compensation to victims and/or their families for various acts of Police brutality and extra-judicial killings in Delta State.

“We also recommended the enforcement of all judgment debts awarded against the Police, which they have refused to obey till date,” Justice Ogisi stated.

She added that the Police were meant to protect rights of citizens and not routinely breach such rights without being held accountable.

“Police should restrict itself to the performance of their constitutional and statutory duties of preserving life and properties and not go outside the ambit of the law,” she added.