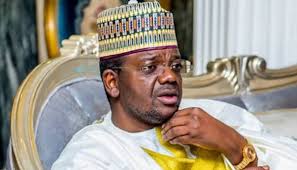 The Federal High Court in Abuja has set July 16 for the hearing of a complaint filed by the Peoples Democratic Party (PDP) to remove Governor of Zamfara State, Hon. Bello Matawalle, for defecting to the All Progressives Congress (APC) (APC).

The complaint, filed in the names of Sani Ahmed and Abubakar Muhammed, two PDP members from Zamfara State, seeks to unseat the governor for abandoning the PDP.
The duo argue in the suit, marked FHC/ABJ/CS/489/2021, that it would be unlawful for Matawalle to retain his office while defecting from the PDP to the APC, thereby transferring the PDP’s victory to the APC, in light of an earlier Supreme Court judgment that the APC had no candidates in the 2019 governorship election in Zamfara State, having not conducted valid primaries.

The plaintiffs seek the court to determine, among other things, that Matawalle must retire from his position before defecting, allowing the Independent National Electoral Commission (INEC) to hold a new election within three months to replace him with the PDP.

The governor had defected from the PDP, which had brought him to power, to the ruling APC two weeks ago, an action that the plaintiffs saw as improper, illegal, and unlawful. When the case was called yesterday, plaintiffs’ lead counsel, Chief Kanu Agabi (SAN), who argued the ex-parte application, told the court that the plaintiffs had been unable to serve processes on the defendants, therefore the desire to do so by substituted means.

“Granting leave to the plaintiffs/applicants to serve the motion on notice seeking leave to amend hearing notices and all other processes on the first and second defendants by substituted means, to include: pasting same at the Zamfara State liaison office at No: 6/7 Sangha Street, off Mississippi Street, Maitama District, Abuja, or leaving it with any adult person in that office,” he prayed. In a brief judgement, Justice Inyang Ekwo granted the request as pleaded and directed that the originating procedures be served on Matawalle and his deputy, Alhaji Mahdi Gusau, through the APC’s national secretariat in Abuja.

The plaintiffs, who claim to be PDP members in Zamfara State, seek the court to order, among other things, that Matawalle and Gusau must retire from their positions before defection, allowing INEC to hold a new election within three months to replace them with the PDP. The action, which was filed on June 17, 2021, before Matawalle defected to the APC, names Matawalle, Gusau, the APC, and the INEC as defendants. In an affidavit filed in support of the lawsuit, Ahmed claims that he and other PDP members in Zamfara State suffered, and that Matawalle and Gusau’s defection will rob them of the efforts they put into guaranteeing the PDP’s election victory.

The deponent said that allowing Matawalle and Gusau, who were beneficiaries of the Supreme Court verdict, to defect to the APC without resigning their current positions would be an injustice to him and other PDP members in Zamfara. “As a member of the Peoples Democratic Party (PDP), who worked tirelessly and invested so much of our time and money to ensure our party’s victory in the 2019 governorship election in Zamfara State, the second plaintiff and I will be severely prejudiced if the offices we worked so hard to win for PDP are transferred to APC through the defection of the first and second defendants (Matawalle and Gusau) while they are still in office. “As indigenes of Zamfara State who joined other indigenes of the state to give PDP our collective mandate for the governorship of Zamfara State, the second plaintiff and I will be severely harmed if the mandate we gave to PDP in respect of that office is unilaterally transferred to APC by the first and second defendants, who did not participate in or sponsor any candidate in the said election,” the second plaintiff and I argue.

The plaintiffs want the court to rule that “the APC, which did not hold primaries for the governorship election in Zamfara State in 2019 and did not participate or sponsor a candidate in the said election, cannot lawfully occupy through any of its members the office of governor or deputy governor of “A declaration that the first and second defendants, who were elected as governor and deputy governor of Zamfara State as members of and candidates sponsored by the PDP, cannot transfer those offices to the APC by defecting to that political party while they are still in office as governor and deputy governor, respectively, under the combined effect of sections 177(c), 187(2), and 221 of the constitution.

Meanwhile, the PDP has filed an application to be added to the litigation as an interested party.