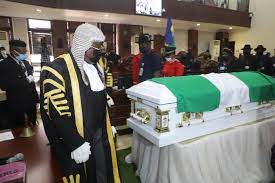 Lawmakers of Delta State House of Assembly, both sitting and non-sitting, held a valedictory session for a former Acting Governor of the state, late Rt. Hon. Sam Obi, whose body laid-in-state at the hallowed chambers of the assembly earlier today.

The Assembly’s Speaker, Rt.Hon. Sheriff Oborevweri, described the deceased as a man that believed in incremental progress in the journey of life. “He began his political career as a councilor and rose steadily to become the Speaker of the House and eventually an Acting Governor in 2010.

“As Member representing Ika North East, he was a shining light as he demonstrated uncommon capacity and knowledge at plenary. He has to his credit critical bills passed into laws.

“The late Rt. Hon Sam Obi was also Chairman, Board of Directors of The Pointer Newspaper and his visions for the newspaper House are still reference points till this day.

“Sadly, we are today talking about Rt. Hon Prince Sam Obi in past tense. My heart bleeds. His passing is not only a loss to his family but to all Deltans. Delta State has lost a political leader with rare grace!” the speaker remarked.

The Deputy Speaker of the House, Rt. Hon. Christopher Ochor eulogized the deceased as a remarkable source of inspiration, especially on issues concerning the house and Delta North in particular, adding that Sam Obi was a strong leader, a performer and a truthful man.

The sitting lawmakers of the House, including the Deputy Majority Leader, Hon Oboro Preyor, the Chief Whip, Hon. Pat Ajudua, gave tributes on the life and death of the deceased and consoled the family he left behind.