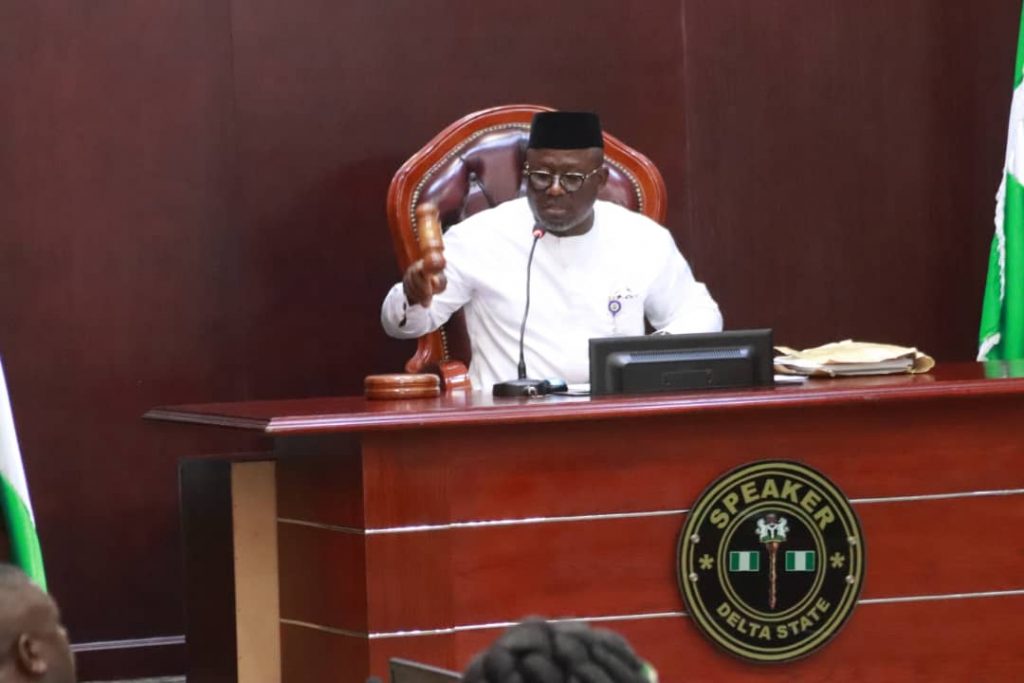 The Bill for a Law to Provide for the Regulation of Livestock Breeding, Rearing and Marketing and To Prohibit Open Grazing and Related Matters now before members of the Delta State House of Assembly now in its second reading had the lawmakers at plenary Wednesday debating the importance and benefits of the bill.

The motion to commence debate on the Bill which is sponsored by 25 lawmakers in the Assembly was moved by the head of the Committee, Hon. Izeze Rume yakubu Reuben, Esq., (Ughelli South) who subsequently was granted permission to open the debate.

In his debate Hon. Reuben called attention to the fact that the 23 clause bill imposes sanctions and grants privileges, and that the disposition to put security first by the bill is not in error.

He said: “Who could have imagined that the Fulani herdsmen who in time past carried stick has now metamorphosed into an Ak 47 carrier and now terrorizing our communities. Thus, we live in threat of the insecurity that arose from the menace of attacks by the herders.”

Among the many other benefits of the bill, Hon. Izeze said: “Section 17 prohibits any form of fire arms being found on any herder and carries a sanction of 10 years’ jail term without the option of fine.  It protects the rights of the breeders against rustling,” pointing out that the law meets the requirement of any law that the House of Assembly can make. He then called on his colleagues to speak up favourably in support of the bill and be counted on the side of defending the territorial integrity of Delta state.

In his contribution, Hon. Anthony Elekeokwuri 9Ika north East) said: “This bill is timely; it is also obvious that the people of Ika north East are in support of the bill. Passing the bill into law will bring relief to the people of Delta state.”

He posited that acquired land must be in the custody of the community, and there must be a veterinary and police post, adding that bill will create and organized cattle rearing sector. “The issue of carrying fire arms and even licensed fire arms should be prohibited. The bill will reduce banditry, cattle rustling and kidnapping and so help to secure Delta State,” Elekeokwuri said.

Hon Emeka  Nwaobi, an engineer, (Aniocha north) in his submission said: “I am the happiest man on earth today, as a partaker of the debate on this bill that every Nigerian has clamoured for. I have had cause on the floor of this House  to call on the governor to send security agencies to stop the killings, maiming and kidnapping of my constituents by Fulani herdsmen.”

He said that markets for cattle to be established in designated areas must have veterinary doctors because of the importance of providing healthy meat for human consumption, and that cattle can only be moved around in the state in open trucks or pick-up van. “Defaulters have sanctions. What it means is that the passage of the bill, it would be a crime for any cattle herder to be found in the bush taking over community land that is not designated for such,” Hon. Nwaobi said.

For Hon. Solomon Igbrakpata (Uvwie), the bill protects livestock owners and no livestock owner, and check the indiscriminate movement of cattle from one location to the other. “It gives room for compensation to be paid by livestock owners to farmers whose farm crops and produce are destroyed cattle; thus it would help to reduce the farmers/herders clash,” Hon Igbrakpata said.

Deputy Minority Leader, Hon Oboro Preyor (Bomadi) said: “This bill regulates everything about cattle rearing. You don’t allow cattle to roam about. It is a bill in the right direction because Deltans will be safe and happier. Veterinary doctors will have to certify that a cow is healthy before it is slaughtered for sale to buyers.”

Hon. Guwor Imomotimi Dennis (Warri south west) submitted that the bill is a beautiful bride and called attention to the judgment of once upon a time by Hon. Justice Adewale on cattle rearing and farmers, saying that that judgment was quite instructive.

According to him, the bill for consideration on the floor of the Assembly is long overdue. Hon. said: “Now cattle rearers are to be registered; the bill is intandem with global best practices, and therefore, a stitch that has come to save nine.”

Hon. (Dr and Mrs) Pat Ajudua, a barrister-at-law (Oshimili North) said the bill had come to wipe the tears of farmers in Delta state. “The bill will put a stop to open grazing. It will put a stop to Fulani herders taking their cattle to every nook and cranny will stop. It will end the sale of dead livestock being sold to the people,” she said.

Hon. Ajudua pointed out that contrary to the view that Fulani and Hausa people are driven away, she said, “No, we want everyone to live according to the law,” adding that “the beauty of this bill is that it prohibits arm bearing. Tying guns on the belly of a cow is unacceptable.”

The Minority Leader, Hon. Innocent Anidi (Ethiope East) said: “We are not asking cattle rearers to leave our land; we are saying that you must do your business in a designated area, and that livestock owners must not carry fire arms. My people will be happy with this bill.”

The bill was later referred to the Special Committee, and mandated to report back to the House on July 28, 2021.