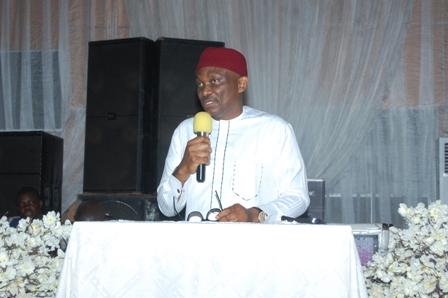 Elumelu stated this in a lecture, titled: “The Role of Enhanced Electoral Awareness In improving The Quality Of Leadership In Nigeria”, he delivered on Saturday, July 17, 2021, at the 5th Biennial Convention of the Class of 84 of St. Pius Xth Grammar School, Onicha Ugbo, Aniocha North Local Government, Delta State.

He noted that it was essential because elections afford the people the right and opportunity to choose their leaders, and that it is only a politically aware electorate that can maximize such rights and opportunities towards enthroning a leadership through which they can efficiently actualize their wishes and aspirations.

Elumelu, who said it was indeed a great privilege for him to deliver the lecture at the convention with the theme “Closer Ties, Stronger Future”, averred that, such leadership must flow from the conscious participation of the people in making informed choices as well as holding the leadership accountable as a vehicle to realize their security, economic and social aspirations.

He said: “This lecture sets out to x-ray the connection between electoral awareness and quality of democratic leadership in the contemporary Nigeria. It will also examine the challenges as well as postulate remedies to fill the yawning deficit in electoral and political participation by our citizenry.

“The questions are: Do we have the desired electoral political participation in our country? What factors enhance or inhibit quality electoral awareness and participation in Nigeria? Why voter apathy and voter suppression is prevalent despite the consensus by citizens, across board, on the need for quality leadership at all levels?

“Furthermore, what factors inform electoral preferences and choice of leadership? Are there cultural, religious, gender or tribal preferences or inhibitions that affect electoral awareness and political participation? To what level do citizens participate in governance by holding leaders accountable? How do these factors affect the quality of democratic leadership? What are the solutions? How can we expand the horizon?”

The revered lawmaker posited that the concept of leadership was a broad field that has been the subject of extended debates among scholars, political analysts and social commentators as it relates to the process of administration and control of human behaviours and pursuits in a particular environment.

Elumelu, who referenced and chronicled various scholars’ definitions of leadership in his lecture, maintained that leadership was a process that commands the combination of skill, knowledge, charisma, vision, integrity, communicative skills, objective, sense of responsibility, capacity to deliver, physical and psychological fitness, self-confidence and empathy to get the people to work together to actualize their common aspiration.

“Under democratic leadership, the people participate directly in selecting their leaders through an established transparent electoral process and rules; they make their choice of leaders freely, in the pursuit of defined objectives at various levels and arms of governance; the ward, local government, state, and federal.

“Such leadership can best be actualized by adequate electoral awareness to enable informed choices by citizens, especially regarding the background, antecedents and electoral worthiness of candidates as well as ways to hold such leaders accountable as provided by the law, for the realization of their common objectives”. Elumelu added.

The articulate lawmaker disclosed that leadership grooming was a process through which existing leaders impact and inculcate values on younger generation of leaders by carrying them along in a hands-on training experience.