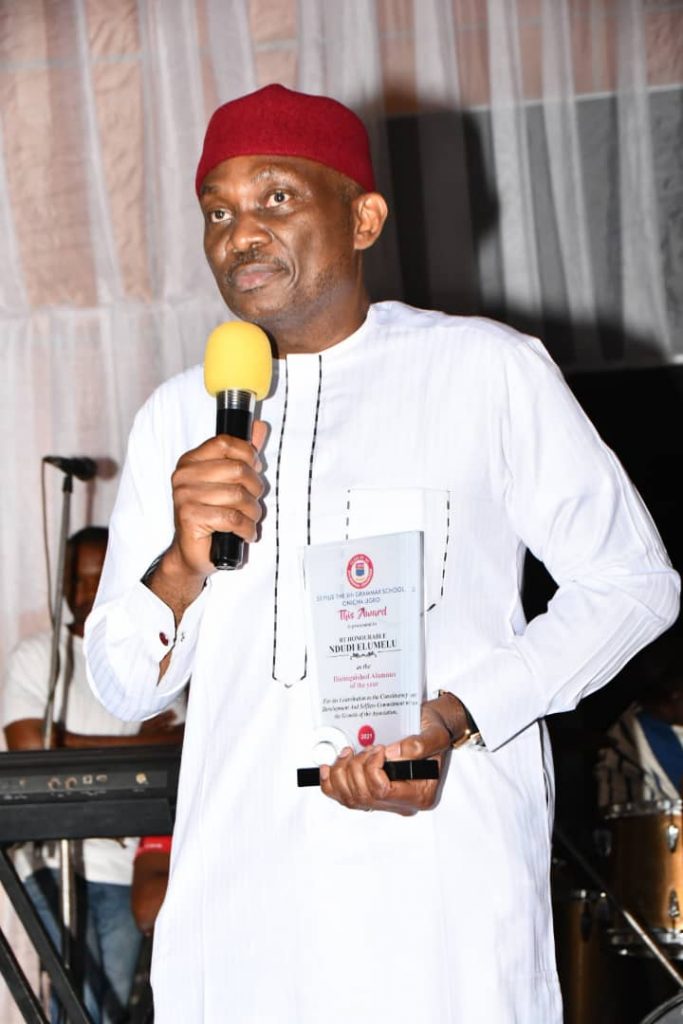 Minority Leader of the House of Representatives, Rt. Hon. Ndudi Elumelu on Saturday was honoured with an award by his classmates of 1984 set of St. Pius Xth Grammar School, Onicha-Ugbo, Aniocha North Local Government Area of Delta State.

The award which was given to him on the occasion of the 5th Biennial Conference of Class 84 set of the secondary school was in recognition of his commitment to society, the development of his constituency, contributions to the growth of the nation and dogged support for the association.

Held at the Gellys Hotels and Resorts, Umunede, Ika North East Local Government, the conference had as its theme: ‘Closer Ties, Stronger Future.”

Elumelu, who represents Aniocha Oshimili Federal Constituency in the House of Representatives also delivered the events lecture titled: “The Role of Enhanced Electoral Awareness in Improving the Quality of Leadership in Nigeria.”

The Class of 84 at the event announced a pledge to build the principals residence for their alma mater at the cost of N35 million, and to which Rt. Hon. Elumelu promised to contribute N5 million towards the project’s realization.

Also honoured with an award was the late principal of the school, Paul Anene Mozia. His son Mr. Ken Mozia, a Senior Advocate of Nigeria (SAN) also an old boy of St. Pius Xth Grammar School received the posthumous award for their father on behalf of the Mozia family, with a promise to send the family’s contribution towards the school’s principal’s residence project.