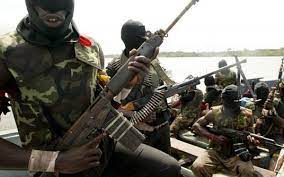 Angered by the meagre three per cent voted for host communities in the passed Petroleum Industry Bill (PIB), a militant group, Niger Delta Revolutionary Crusaders (NDRC), has directed its commanders in the Niger Delta to return to the creeks and await further directive to resume hostilities against oil and gas assets in the region.

It will be recalled that in spite of the outrage that accompanied the allotted three per cent to host communities inclusive of pipeline-bearing communities in the PIB, the National Assembly, in defiance, went ahead to pass the bill for assent by the President.

Immediate past governor of Bayelsa State, Seriake Dickson, on Thursday, while joining his voice to condemn the three per cent allocation, warned of possible dire unrest in the region.

In a statement on Friday by NDRC’s spokesman, W.O. I Izon-Ebi, the militants condemned the three per cent as well as the 30 per cent allocated for the exploration of frontier basins in the passed bill.

With “We Will Defend Our God-Given Resources as the title of the statement, the militant group said it would fight until the obnoxious sections of the PIB were reviewed by the National Assembly.

While describing the PIB as a coup against the people of the oil-rich Niger Delta by Nigeria, the group decried the constant desecration of the entire region through oil and gas exploration and exploitation with no commensurate provision to develop the region.

“For 56 years, the region has suffered desecration of its sacred places like worship centres, lands, streams, lakes and severe environmental degradation without remediation.

“While the government and people of Zamfara state are allowed to control 100% of their gold resource (fiscal Federalism applying in Zamfara State), what the people of the Niger Delta region could get from their own natural resources is a paltry 3% for host communities and in contrast, a whopping 30% for exploration of frontier basins.

“This is an economic coup against the people of the region; it is an insult, a daylight robbery and betrayal by the Nigerian government.

“The region embraced peace because it was the most civilized thing to do in order to give way for proper dialogue, genuine government commitment and re-idealogical construct about the Niger Delta region.

“Unfortunately, about 11 years of giving peace a chance in the region, the Nigerian government has rather become ruthless to the region through obnoxious statutes. These are our genuine concerns and our grievances,” the group averred.

The militants said they have, therefore, directed their “commanders in the region to go back to the creeks and wait for further directive on the next line of action. We will defend our resources and protect our region from further mindless pillage of our God-given resources.”

In spite of the huge investment in the water sector by the government and international organisations, water scarcity has grown to become a perennial nightmare for residents of Abeokuta, the Ogun State capital. This report x-rays the lives and experiences of residents in getting clean, potable and affordable water amidst the surge of COVID-19 cases in the state…Militant group directs commanders  Militant group directs commanders