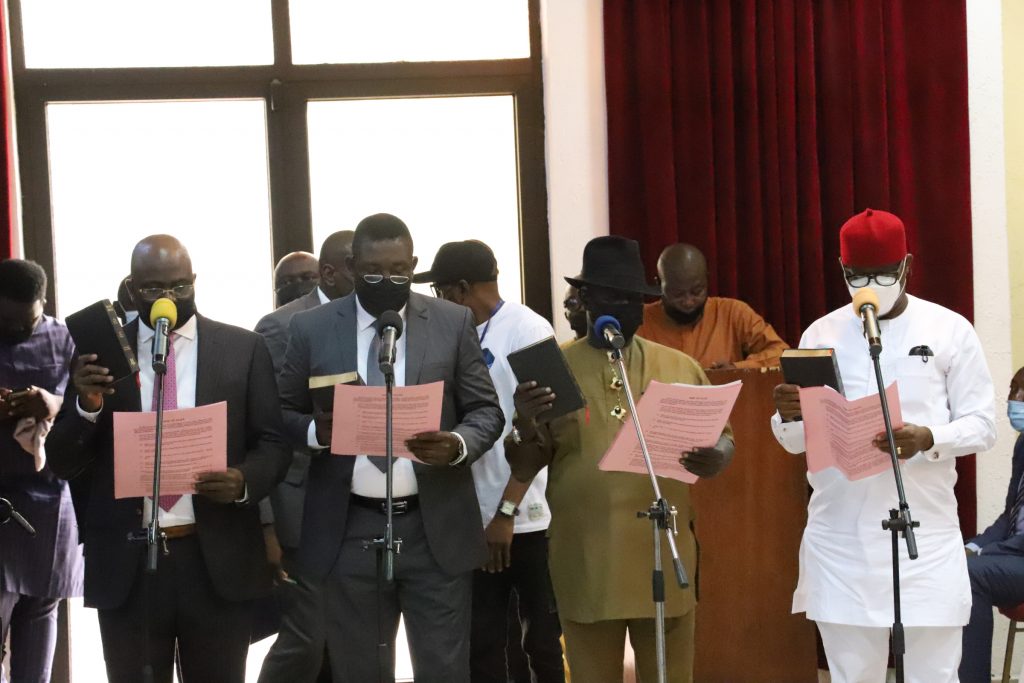 Delta Governor, Senator (Dr) Ifeanyi Okowa, on Tuesday, charged political appointees in his administration to contribute to efforts of the state government in surmounting socio-economic and developmental challenges confronting the state.

Okowa gave the charge while swearing in eight new Special Advisers at the Government House, Asaba.

He remarked that appointments made by him so far were not to fulfill requirement of Section 196 of the Constitution, but was a deliberate effort at bringing into governance, men and women of impeccable character and versed knowledge on how to tackle unemployment, poverty, anti-social vices, suspicion and distrust.

“I expect concrete, measurable inputs from everyone of the new set of appointees as I do of all that came before them.

“It has been my observation that many appointees, all too frequently, are content to bask in the prestige of the office without really proffering ideas and concepts to the many developmental problems that confront us,” the governor said.

He stated that his administration believed that the stability, peaceful co-existence and prosperity of the state depended on the ability to run an all-inclusive government peopled by men and women that could oil the wheel of Stronger Delta vision.

He added that the state was driven by a strong, diversified, resilient economy, transparency, effective public communication, community engagement and excellent service delivery.

“This administration is passionate in the belief that the stability, peaceful coexistence and prosperity of the state depend on the ability to run an all-inclusive government peopled by men and women of competence, capacity and character.

“Hence, the new special advisers are additional key resources in our governance team, painstakingly assembled to be architects and builders of a Stronger Delta,” Okowa said.

According to him, the cardinal goal of anyone in position of trust is to render quality services to the people, which is the only way to merit any appointment.

“As leaders, we must work – and walk – with the consciousness that leadership is service; service to the people for whom we hold the position in trust.

“Thus, it is incumbent on appointees to devise means and methods towards discharging that calling and responsibility.

“A leader, and by that I mean any political appointee at whatever level, should be a repository of ideas for solutions to the problems of unemployment, poverty, anti-social vices as well as suspicion and distrust that breed inter-ethnic feuds in our communities.

“It is my expectation, therefore, that all appointees of this administration consider it their duty to connect with their communities and engage in regular advocacy that will remould the youth and set them on the right path.

“I do not expect it to be a walk in the park. But it is the burden of leadership, and one that we all must bear with dignity and equanimity.

“Where there is a will there is way, as the saying goes. I trust that we will see this charge -and challenge as a clarion call-to-arms to fight for – and safeguard – our collective future,” he said.

While remarking that the future of Nigeria was at risk due to “the disconnect’’ between government and youths, he urged appointees to go to their communities to sensitise youths on the need to embrace core values to guarantee a bright future.

The governor, however, stated that no fewer than 100,000 youths in the state had been trained and empowered to become successful entrepreneurs in various fields, stressing that the state government’s efforts had started yielding positive results.

Responding on behalf of the new Special Advisers, Mr Johnson Erijo thanked the governor for finding them worthy to serve, and assured that they would give their best in the realisation of his Stronger Delta vision.