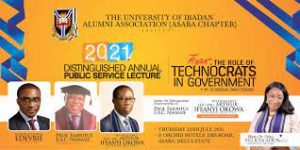 The case has been made for a bias in favour of choosing persons with technical capacity for elective positions like president and governors as it will help to integrate people’s political aspirations with the technical needs necessary to achieve the best of the people’s aspirations.

Former Chief of Staff to Governor Ifeanyi Okowa of Delta state, who is believed to have eyes for the governorship position of the state in 2023, Olorogun David Edevbie, made the submission while speaking on “2023: The Role of Technocrats in Government,” at the 2021 annual Public Service Lecture of the University of Ibadan Alumni Association, Asaba Chapter on Thursday, July 22nd, 2021 at the Orchid Hotel, DBS Road Asaba.

Edevbie, a chartered accountant, former finance commissioner and one time Principal Secretary to the late President Umaru Musa Yar’Adua  who took a look at the role of technocrats in government, democracy, technocracy and technocrat, criticisms of technocracy, expertise and citizenship: the challenge to democracy, technocrats and politicians in answer to the question – “have technocrats impacted Nigeria positively” said: “I would argue that they have put not to the extent they should or could have for the simple reason that they have not taken the drivers’s seat as president or governors in appreciable numbers.”

He pointed out that what technocrats in general have done from 1999 to date in Nigeria was to help to design or formulate policies that are poorly implemented or even abandoned, thus shattering expectations and engendering disappointments.

The investment expert said: “Presently, the future of our development lies not in a shift from democracy in the conventional sense to democracy, where the role of the expert is recognized and appreciated but in the manner that democracy and technocracy are synchronized into a symbiotic relationship.

Edevbie said that as a fledgling democracy, “our system can benefit greatly by a weighted consideration in favour of technical capacity in the election of leaders like president and governors  to enable them to integrate the dictates of political aspirations of the people with the realism of technical requirements for optimal realization of the aspirations of the people.”

Earlier, he called attention to the definition of democracy given by Francis Owakah  and Robert Aswani  that “ Democracy is a system of governance  in which political leaders are freely elected , with the underlying assumption that the leadership will be responsible for the governed by translating pre-election pledges into concrete policies that enhance the general welfare of society, however to a large extent, the elected leaders rely on experts to formulate and implement the relevant policies.

While also noting that in most advanced democracies that politicians/political parties are elected based on their published election manifestoes, he said however, that an election manifesto is merely a source of information for potential voters to help in deciding if a political candidate/party is to be voted into office. This helps in highlighting to the electorate the areas and issues that the candidate/political party cares about and wishes to deliver on.

“However, once elected, the manifesto commitment or electoral promises will need to be translated into policies and delivery strategies. This is where the challenge sets in for the elected politician – to transform these commitments into actions.

Governor Okowa, an alumnus of the University of Ibadan who was special guest of honour and was represented by the commissioner for lands and Survey, Barrister Kate Onianwa, while underscoring the impact of alumni associations in the development of education the world over, said he was impressed by the choice of the theme: “The Role of technocrats in government,” especially as the guest speaker , Olorogun David Edevbie is a seasoned technocrat in government.

The Governor said: “He is in the best position to give us, not only an intellectual angle, but from the standpoint of a participant observer. Technocrats are individuals with specialized training, who approach societal problems from the vantage point of appropriate knowledge and experience. Such technocrats therefore exercise authority and power by virtue of their competence in specific fields. Among many businesses, institutional and political leaders rely on experts to formulate and implement relevant policies to bring needed changes to governance systems and resolve issues that threaten integrity and sustainability.”

He then commended the University of Ibadan Alumni Association, Asaba Chapter, for putting together the 2021 Annual Lecture.