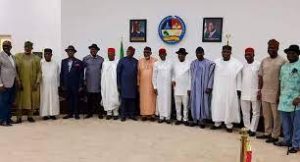 Northern Nigeria is taking a “victory lap” for “defeating” Southern Nigeria in the quest to enact equitable and credible laws regarding two of the most consequential Bills ever presented in the National Assembly (NASS) since the return of democracy in 1999.

The Petroleum Industry Bill (PIB) and Electoral Act (Amendment Bill) were passed in heated settings, culminating in the opposition PDP staging a walkout in the House of Representatives. The Northern caucus, as a regional bloc, and the leadership of the NASS, which tilts in favour of the North and the ruling APC, were fingered for causing the commotion trailing the Bills’ passage. It’s no surprise the North is thumping its chest for “vanquishing” its politically-naïve South, due majorly to its numerical strength, unity of purpose and power, to dictate direction of matters in the NASS.

The “victory message” by Deputy Speaker of the House, Hon. Idris Wase, and Northern caucus leader, Hon. Musa Sarki Adar, to the members of the Northern caucus, alluded to those advantages the North has over the South.

The message, reportedly sent by Hon. Wase’s chief of staff, Aminu Malle, to the WhatsApp group of the caucus, was loud about the North’s capacity to protect the interest of the region. It reads:  “… I am directed to write and formally congratulate and appreciate all the Northern caucuses for standing firm through their wisdom and strength to ensure the Northern interest in both PIB and Electoral Act is adequately placed in a position of advantage.

“There is no doubt a house united will forever get whatever it wants, giving (sic) the advantage we have in size. May God Almighty continue to unite and bind us stronger. May He bless and reward us all abundantly… Thank you all.”

Plain in that message is the taunting of the Southern caucus in the NASS, and the entire South for lacking the number, and most importantly, the “unity” to fight as one to achieve for the South. The North is always proactive, and plays for regional and party interest; while the South is reactive, and plays mostly for party and seldom for regional interest, to the advantage of the North.

On any matter, the Northern caucus will consult, and coordinate the views of North’s elite: Elected and appointed representatives, the intelligentsia, traditional and religious leaders and youth groups. For example, on June 28, before the PIB was passed, the Sultan of Sokoto, Alhaji Sa’ad Abubarkar III, charged Northern members in the NASS to ensure the North has “a PIB that will encourage massive hydrocarbon exploration in those Frontier Basins.”

At a retreat in Suleja, Niger State, titled, “PIB and the Future of Nigeria,” the Sultan said: “We continue to talk about poverty, unemployment, and attendant insecurity while we are sitting on billions of barrels of Hydrocarbon from Sokoto Basin to Chad Basin, and from Gongola to Bida and Benue Trough Basins untapped.”

Whereas the Sultan, as North’s typical voice, guides the Northern caucus on how to advance North’s interest, the South, lacking such a voice, reacts after-the-fact, like the “rejoinders” of Southern Governors on Restructuring, Open grazing, 2023 presidency, PIB and Electoral Act, and attack on Sunday Igboho’s house, after the North had espoused and/or taken stands on them.

No matter how injurious to the unity and corporate existence of the nation, which the North crows about, Northerners will take the North’s consensus to the NASS and pursue it conclusively.

Passing crucial Bills in the NASS is by absolute majority. Thus, on any issue, the North, with a “simple majority” in the bag, needs only a few “defections” from Southern lawmakers to have its way.

The PIB, seen as a regional interest that ensued a showdown between the North and South, was turned into “what’s our own in it,” with the North assuming the “disadvantaged” with no oil wells or a devastated ecosystem that oil-bearing communities suffer.

In the end, so-called “frontier basins,” mainly Northern states, were “awarded” 30 per cent of the sum the Nigerian National Petroleum Company allocates for oil exploration, a fair game of some sorts for the North to reap from the opaque windfall. But the demand for a paltry 10 per cent, then five per cent to actual oil-producing communities was reduced, via a Northern stratagem, to three per cent, on the excuse that oil-producing states in the South already enjoy 13 per cent derivation.

Sadly, this carper to literally deny what’s due to the “goose that lays the golden eggs,” has “stirred a hornet nest” in the Niger Delta, with ex-militants warning that without raising the percentage to the oil communities to at least five per cent, they would return to the trenches and start attacking and destroying oil installations, to cripple the Nigerian economy. Sounds frighteningly familiar!

Coming to the four-time amended Electoral Act, and rejected as many times by President Muhammadu Buhari, we’ve the words of former United States presidential candidate, Dr Ben Carson, capturing the troubling role politicians play in the society. Dr Carson: “We’ve been conditioned to think that only politicians can solve our problems. But at some point, maybe we will wake up and recognize that it was politicians who created our problems.”

Who created the obvious, and maybe contrived defects in the amended Electoral Act that the NASS members were called upon to remedy? Politicians, of course, including members of the NASS! So, how could they solve the problems that benefit them? It’s like asking a thief to help find an item they stole. It won’t be found, as they will divert attention from where the item is hidden.

Politicians know that electronic transmission of results will cure the process of manual collation that engenders manipulation, which undermines actual and declared results at the polling units. That’s why the NASS approved e-registration of voters, submission of application forms by candidates, accreditation of voters, and voting on Election Day, and rejected, amid opposition protests, e-transmission of results of the same election.

For Northern lawmakers, the Electoral Act was a party matter laced with regional interest. Hence, they kicked against e-transmission of results by the Independent National Electoral Commission (INEC), citing “many Northern states have weak internet penetration.”To sustain this logic, the Nigerian Communications Commission (NCC), invited by the NASS, lied against its records of over 80, 70, and 30 per cent of 2G, 3G and 4G penetration across Nigeria.But INEC, excluded from interfacing with the NASS, and placed at the NCC and NASS’ discretion on e-transmission of results, has countered the claims by the Northern lawmakers and NCC.

INEC’s Director of Voter Education and publicity, Nick Dazang, on AIT’s Kakaaki programme on Friday, July 23, said it’s “possible and practicable to transmit results timeously and in real time.” Dazang said since 2020, the results of 26 polls, plus the governorship in Edo and Ondo, were “uploaded to INEC’s portal for viewing” only, as the law doesn’t allow e-transmission, adding that in 2018, a technical committee of INEC, NCC and service providers reported that results could be transmitted almost 100 per cent.

As the North, buoyed by “winning round one” of the battle of supremacy between it and the South over the PIB and Electoral Act, continues to deploy its “wisdom, number and unity” to advance controversial pending or “mooted” Bills favourable to its region, a divided South should shape up or brace for more woes ahead.