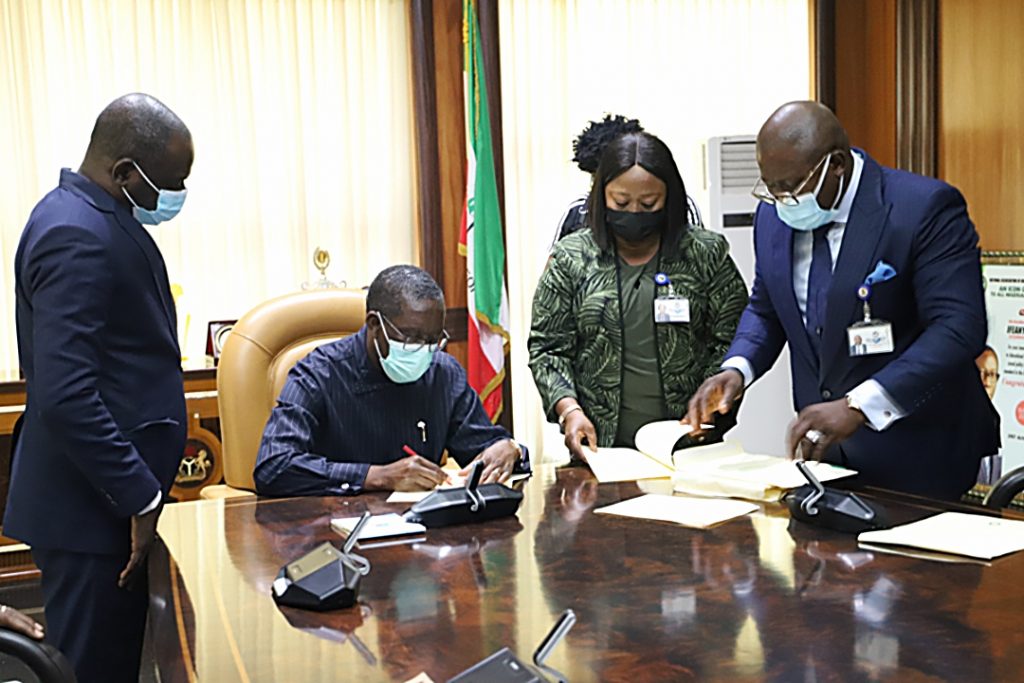 Delta Governor, Senator (Dr) Ifeanyi Okowa, on Tuesday said his administration was working towards alleviating sufferings of the less-privileged in the state.

Okowa made this known after assenting to five Bills passed by the State House of Assembly at Government House, Asaba. 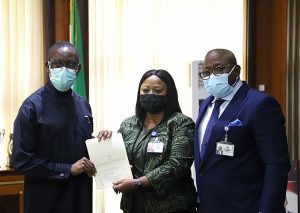 The Bills, which were presented to Okowa for assent by the Speaker of the Assembly, Chief Sheriff Oborevwori, who was accompanied by his Deputy, Chief Christopher Ochor and other principal officers, were the Delta State University (Amendment),Bill, 2021and Delta State Printing and Publishing Corporation (Amendment) Bill, 2021.

The governor thanked the House of Assembly for its cooperation and collaboration, noting that his administration had achieved a lot because of the cordial relationship between the executive and the legislature.

He urged the speaker and members to sustain the collaboration in the best interest of the people of the state and said “we have been doing a lot for our people but there is still a lot more to be done and we urge all Deltans to remain patient with us.

“In the remaining 21 months, I want to reassure all Deltans that our eyes are still focused on the ball to do the best we can to impact positively on their lives in spite of the very challenging situation in our nation today.

“In the course of the next three months, I am sure that we will be reaching out a lot more to those who are less-privileged in the society.

“We will find ways to continue to empower them to put food on their tables, because it is truly very necessary as in today’s Nigeria, it is very tough for families to take care of themselves but we will try continually to assist families to be able to eat at the end of the day.

“We have already designed programmes for the very poor in the society so that we are able to lift such families from the very poor stage they are to a state where they can be stable and they can be assured of meals at the end of the day for their families,” Okowa said.

He remarked that beyond the infrastructural development across the state, his administration’s Contributory Health Insurance Commission was doing quite a lot to reach out to the vulnerable, particularly pregnant women and children under five years of age.

“It is already impacting on our healthcare indices because Delta is readily proven when it comes to health care indices as regards maternal and infant mortality,” he said.

On the bills, the governor said that they were very important in the life of his administration, explaining that the amendment to Delta State University Law was needed in order to give effect to the Dennis Osadebay University to return the faculties of Agriculture, Management and Environmental Sciences from Asaba to Abraka.

“We have just witnessed my assent to five Bills that were passed by the State House of Assembly and they are very important Bills, particularly as it relates to the need for us as a government to have separation of powers and to give autonomy to each arm of government.

“But, very importantly are the two Bills that give autonomy to Delta State House of Assembly and the State Judiciary.

“You will recall that in the last two years we have been operating autonomy for the House of Assembly, but because of the recent events in our nation, it became necessary to have an amendment to that law which we had previously passed as a state to conform to that being done across the nation.

“We had to repeal the initial law to re-enact the Delta State House of Assembly Fund Management Bill which has just been signed into law.

“In the same vein, the State Judiciary Fund Management Law had to be repealed also and to be re-enacted in conformity with the agreements reached among all the states of the federation.

“I am truly glad that today we have given full and acceptable financial autonomy to both the House of Assembly and the Judiciary.

“It is my hope and prayer that this will energize the House and the judiciary to continue to do the best they can to impact very meaningfully on the governance of our people.

“However, I must clearly state that in Delta State, in spite of the separation of powers, we work collectively in the common interest of our people and I must use this opportunity to appreciate the Delta State House of Assembly for the great job they have been doing for our people.

“In working together it is much better to be able to communicate with our people and to provide the dividends of democracy in spite of the very challenging moments that we have in our nation where the economy is dwindling and insecurity is high,” he stated.

Earlier, Oborevwori had said that the passage of the Bills was to deepen tenets of democracy in the state.

The speaker said that the Assembly had been enjoying financial autonomy since 2019 but needed to repeal the existing law to conform to the agreements reached by the Nigerian Governors’ Forum and relevant stakeholders.