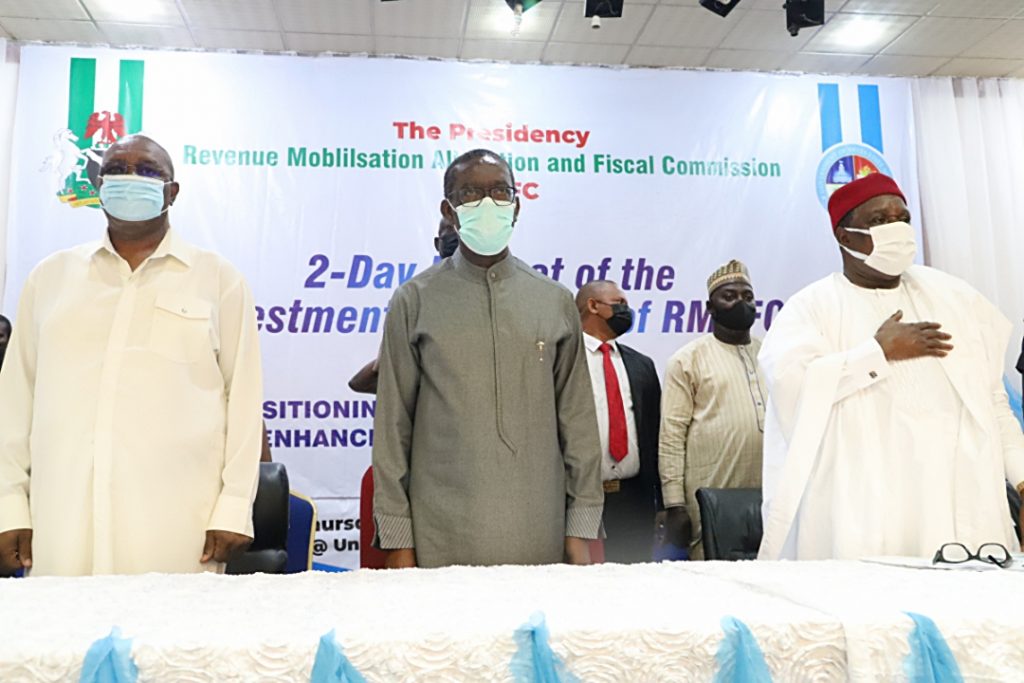 Delta Governor, Sen. (Dr) Ifeanyi Okowa, has called for proper monitoring of Nigeria’s crude oil production to ascertain volume and ensure transparency and accountability in the oil and gas sector.

Okowa made the call while opening a two-day Retreat of the Investment Committee of Revenue Mobilisation, Allocation and Fiscal Commission (RMAFC) at Unity Hall, Government House, Asaba on Thursday.

The retreat, with “Repositioning Federation Investment for Enhanced Revenue Performance” as theme, was organised to enhance the RMAFC’s revenue generation and monitoring strategy for improved public spending.

The Governor said that to ensure effective monitoring of crude oil production and export, there was the need to deploy the latest technology such as Artificial Intelligence/Robotics to guarantee effectiveness and management of cost.

He called for the reduction in delays arising from granting of agency permits that often led to high cost of drilling and for urgent addressing of security challenges, including crude theft, kidnapping, piracy and bunkering.

He said that it was a consensus that many oil and gas agreements reached with International Oil Companies/Operators had not been closely monitored, hence the observed low level of compliance.

Okowa pointed out that the agreements were formulated and signed a long time ago and did not reflect present economic realities, adding that Delta Government was particularly concerned about agreement with host communities, as a major oil producer.

He, therefore, urged the IOCs/Operators to keep faith with the General Memorandum of Understanding with the host communities for meaningful infrastructure development and employment generation for the purposes of peace and stability.

“Close monitoring of the implementation of these GMOUs will ensure that people-oriented projects such as construction of hospitals, provision of portable pipe-borne water, building of schools and information technology centres, as well as skills training and acquisition centres in host communities are given priority attention.

“This will engender the provision of an atmosphere conducive for the IOCs and other operators to function without let or hindrance,” Okowa stated.

He urged RMAFC’s Investment Committee to take a critical look at the seeming lack of competitiveness in Nigeria’s oil and gas sector, saying that Nigeria had one of the highest production costs in the global oil industry.

The governor, who had earlier received the RMAFC Chairman and members on a courtesy call, said that there was the need to have a new revenue allocation formula that favoured the states and the local government areas.

“We are facing insecurity now; we should be thinking of how states can help to check insecurity in their areas by providing state police to compliment the Federal Police,’’ he said.

He stated that there was need to amend the country’s Constitution to allow RMAFC to forward its proposals directly to the National Assembly for approval.

“A situation where the Constitution restricts the Revenue Mobilisation Allocation and Fiscal Commission which ought to be totally independent, to send its proposals directly to the National Assembly, is not proper.

“We think that there is a need to amend that section of the Constitution in order to empower the commission to send proposals directly to the National Assembly to give greater independence to it and guarantee fairness that we expect as sub-national governments,” Okowa said.

In a goodwill message, Minister of State for Budget and National Planning, Mr Clem Agba, said that the ministry had ensured effective budget performance framework since 2019.

The minister, who was represented by Commissioner representing Edo in RMAFC, Mr Victor Eboigbe, said that it was crucial to improve on federation investment to ensure efficiency in public spending.

He said that the economic and sustainability plan developed by the Federal Government had worked tremendously as health and economic indices were at a positive trajectory.

He said that the Commission was mandated by the 1999 Constitution (as amended) to mobilise and monitor revenues accruals into and disbursements from the Federation Account.

“As you know, the nation went through two economic recessions within a span of four years due to fall in global crude oil prices.

“The primary objective of this retreat therefore is to ascertain and appraise Federation’s investment vis-a-vis revenue accruals into the Federation Account.

“At present some of the Federation Investments revenue contributions into the Federation Account are in negative or very insignificant hence there is need for this gathering of professionals and intellectuals to rub minds and come up with suggestions on how to change the narratives,” he stated.

Welcoming participants and government functionaries earlier, Chairman of Investment Committee of Commission, Mr Andrew Agbaga, said that the retreat would deliberate on the current penalty from gas flaring which was quite insignificant in spite of the huge volume of gas flared by oil companies.

“Revenue from the oil sector has been dwindling and this explains the huge funding gap to governments at all levels.

“This retreat will therefore consider ways to ensure that wastages and leakages are blocked to the barest minimum and ensure that the Commission’s monitoring strategies are strengthened,” he said.