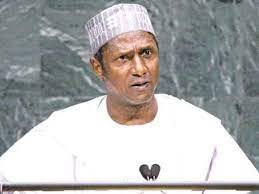 Aminu Yar’Adua, the son of late President Umaru Yar’Adua, has been arrested for the murder of four people in Yola.

Mr Yar’Adua was remanded in jail detention by a magistrates’ court in Yola on Thursday for crushing four individuals to death in an auto accident in Yola.

On June 23, this year, the late president’s son, a student at the American University of Nigeria (AUN), was accused in court with causing death through unsafe driving.

According to the police, Mr Yar’Adua, while driving through the Yola bypass on June 23, crushed six persons as a result of speeding, according to a First Information Report (FIR) filed in court by the prosecutor, Zakka Musa.

The crash killed four people and injured two others, according to the court. The victims were from Sabon Pegi, Yola South local government district, according to police data.

The prosecutor told the court that the family of the deceased crash victims wanted N15 million in compensation from the defendant.

When the FIR was read to the defendant, as the prosecutor had requested, he denied committing the crime and described the claim as false.

The prosecutor then requested that the case be adjourned so that he could copy the case file and send it to the Department of Public Prosecutions (DPP) for legal advice.

Jummai Ibrahim, the magistrate, granted the prosecution’s plea and remanded the case to August 19 for further consideration.

She ordered the ex-son president’s to be detained in prison.

His father, a former governor of Katsina (from 1999 to 2007), went on to become President of Nigeria following his term as governor. He died in office after a long illness that threatened to throw the country into political chaos because his allies refused to acknowledge his inability to lead. (NAN)