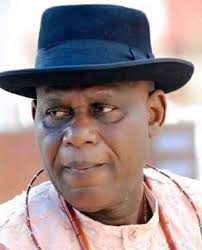 A former Secretary to the Delta State Government (SSG), Comrade Ovuozourie Macaulay has commiserated with the Oneya family of Agbarho over the death of their patriarch, Brigadier General Dominic Oneya (rtd.)

Oneya died at his residence in Effurun in Uvwie Local Government Area of the State at the age of 73.

In a condolence message issued in Asaba on Thursday, Macaulay expressed deep sadness at the demise of a man he described as calm and gentle giant.

“This is a painful loss of a man who bestrode the national landscape as an accomplished soldier, a military governor, a sports administrator and community leader.

“General Oneya will surely be missed particularly now that our nation, Nigeria is in dire need of experienced counsel on how to overcome the numerous challenges facing us,” he stated.

However, he urged the family and friends to take solace in the fact that the former military Governor lived an accomplished and fulfilled life.

Macaulay prayed to God Almighty to grant the family, friends and colleagues the fortitude to bear the loss.