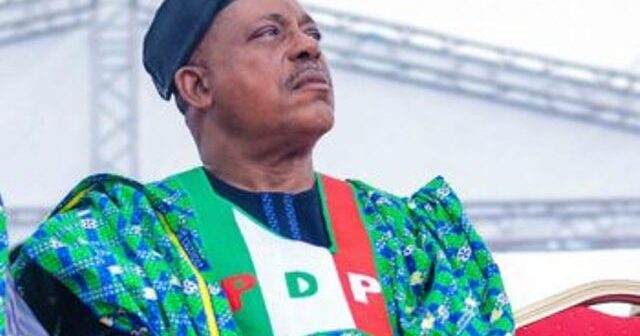 Secondus reacts as court restrains him as PDP National Chairman

Prince Uche Secondus has been restrained from parading himself as the National Chairman of the Peoples Democratic Party (PDP), or even as a member of the party.

The judge, after reading the affidavit in support of the motion of ex parte and hearing the submission of H.A. Bello, Counsel to the Applicants, granted the interim injunction barring Secondus from participating in party activities.

The judge further granted leave to serve, by substituted means the originating summons, motion on notice, all orders made by the court and all subsequent processes on the respondent by pasting same on his gate at No.1 William Jumbo Street, Old G.R.A Port Harcourt.

Meanwhile, Chief Secondus has reacted to the court injunction. A statement by the Special Adviser, Media, Mr. Ike Abonyi, stated that the PDP national Chairman and the party will certainly appear in court if called to do so.

Media office of the National Chairman of the Peoples Democratic Party, PDP has been inundated with calls from media houses on a press statement sent to newsrooms by Kelvin Ebiri, Special Assisatant Media to the Rivers state Governor, Bar Nysom Wike announcing that “Court Restrains Secondus from Parading himself as National Chairman, Member of PDP”.
Our reaction- “If Secondus and the party are taken to court they will defend themselves.

“It’s disheartening that the interim order of court used in removing the former Chief Justice of Nigeria, CJN,Justice Walter Onnoghen unilaterally in January, 2019 for which PDP vehemently condemned is resurrecting again from Port Harcourt.

“PDP and Secondus are not afraid of court, this party is a child of history, owned by Nigerians, bigger than any individual including desperadoes.