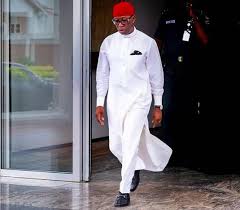 PERSPECTIVE – Delta at 30: Why Deltans should celebrate

The birth of every individual, no matter how demeaning his or her background, is a source of joy to not only the parents and the immediate family, but the people of goodwill in the society.

Could it be that the parents have been childless since marriage or have been having just a single sex as children? Could it be that it was simply an additional expansion of the family for cultural emphasis or a mark of productive potency? Whatever it is, a new arrival in any family is a thing of joy.

As it is in a family, so it is in a country. The creation of an additional state in a country is a thing of joy for those in the locality; it brings power closer to them and elevates them beyond being in a larger centralised sharing of power, particularly in the African context.

And so, when in August 27, 1991, the news drifted to the Urhobos, the Aniomas, the Ijaws  and the Itsekiris that a new state had been created for them, the drums were not only rolled out to celebrate the new development, the people of the newly created Delta State, with its capital at the fringe of Anambra State in the country, suddenly felt a sense of belonging, so much so that they started envisioning a stronger integration of a state of diverse ethnicities, cultural mores and values of same people.

From the earlier truncated democratic administration of Olorogun Felix Ibru, through the vivacious administration of Chief James Onanefe Ibori and the consolidating two tenures of Dr. Emmanuel Eweta Uduaghan, truncated with an interregnum, during which the Late Sam Obi, the then Speaker of the state House of Assembly, acted as the governor of the state for three months, following the nullification of the election of Uduaghan as the state governor, up to the coming of Senator (Dr) Ifeanyi Okowa as the governor of Delta State on May 29, 2015, the state and the people have gone through some levels of development, worthy of celebrating its creation and existence in Nigeria.

However, without casting any aspersions on his predecessors, Governor Okowa has shown rare resilience in piloting the affairs of the state towards the aspirations and expectations of the people of the state. Coming at a time when the global economy was in horrifying shambles as a result of the sudden economic meltdown, Okowa braced up with all his managerial and political astuteness to pull off the ship of governance in the state from sinking.

Like the Herculean task before him, he not only surmounted all the daunting odds, but had proven the truism that with the total support of his people, a man with determination could transform a hopeless situation into a mood of celebration.

Six years down the lane, Okowa has consolidated on the creation of Delta State. Apart from the massive road rehabilitation and construction that has earned him the “Road Master” sobriquet in the state and beyond, Governor Okowa’s monumental developmental strides in the state call for celebration as the state marks its creation since 1991.

There are some hard core detractors who still feel that there was nothing to celebrate. However, the truth remains that for the state to remain an indivisible family since its birth in the midst of excruciating insecurity, ethnic division and religious intolerance in the country is a pointer to the need to be thankful to God. Governor Okowa had sounded that faith in his inaugural address as the governor of the state in 2015, that if one did not faint of exhaustion by determinedly holding on, one would surely live to bash in sunshine and glory!

Yes, Deltans should hold on to the faith of trusting that soon, not only would they harvest fruitfulness from their patience, but would tell the revolutionary story of a man who was bent at leaving the state better than he met it in 2015.

Congratulations, Deltans, as Delta celebrates at 30!