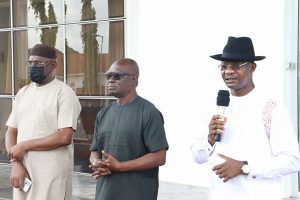 The Delta State Executive Council on Thursday, approved the extension of Warri-Uvwie Storm Drainage project to ensure proper and enduring control of flood in the area when completed.

The extension, according to the Commissioner for Information, Mr Charles Aniagwu, consists of flood control works in Ugbuwangue community in Warri South Local Government Area and additional 15 work sites in phases I and II of the drainage project, bringing the sites to 76.

Aniagwu, who briefed newsmen on the outcome of the council meeting presided over by Governor Ifeanyi Okowa in Asaba, said that decisions reached on project and other issues at the meeting, were targeted at measures that would entrench and deepen the Stronger Delta agenda of the administration.

The commissioner, in company with the Director-General, Warri-Uvwie and Environs Development Agency, Comrade Ovuozourie Macaulay and the Chief Press Secretary to the Governor, Mr Olisa Ifeajika, said other projects, including the Advanced Diagnostic Centre and the Mother and Child Medical Centre, Owa-Alero, had been earmarked for immediate completion.

He said that the council approved additional works and procurement that would make the medical centre a world-class facility, adding that the Ministry of Health had been directed to ensure that work on the facility was fast-tracked.

He disclosed that the government also approved the appointment of Isaac Ajawhobu as the Odiologbo of Onogbokor Kingdom in Ndokwa East Local Government Area.

Aniagwu further stated that adjustments for the state’s participation in Central Bank of Nigeria (CBN) Anchor Borrowers Programme to get more Deltans to key into the agricultural programmes were also approved by the council.

On his part, Macaulay recalled that the initial contract for the Warri and Uvwie flood control projects was awarded in January 2020, but that progress of work was stalled by COVID-19 pandemic which set in and caused a lockdown.

“I am happy to report that CCECC, the contractor, has achieved 50 per cent of the initial contract while Levante has achieved a little over 40 per cent on its part, and the people of the areas are happy.

“I can tell you that if you go to Warri now, there are lots of the areas where we have already worked on and the people are very happy because there is no more flooding.

“The flooding in Enerhen Road and Enerhen Junction is now a thing of the past because the whole area has been taken care of,” he said.

Macaulay disclosed that with the increase of work sites on the storm drainage projects from initial 61 to 76 caused a corresponding increase of the contract value by N4.5 billion from the original sum of N9.5 billion, explaining that the increase was necessitated by some developments in the area.

“The whole of Ugbuwangue community is under water and the government at today’s meeting has also approved that the area should be taken care of,” he added.

Farmers lose 70 hectares of rice farm to flood in Anambra