A former Secretary to the Delta State Government (SSG), Comrade Ovuozourie Macaulay has affirmed that the State has greater prospect for development than it had 30 years ago.

Speaking on the anniversary of the creation of the State, he said right from the first civilian administration of Olorogun Felix Ibru up to the present one, there has been deliberate and determined efforts to grow the state and the people.

For instance, he noted that the State capital, Asaba has risen from one sleepy town at creation in 1991 to one of the fastest growing and bubbling State capitals in the country.

This, he attributed to the pioneering role of Olorogun Felix Ibru; the foundation laid, particularly the opening up of the riverine areas by Chief James Ibori; the bold steps in making Asaba truly a State capital as well as the attention given to the rural areas by Dr. Emmanuel Uduaghan; and the efforts of Senator Ifeanyi Okowa in taking the entire gamut of development a notch higher.

“The challenges are enormous but are surmountable. While some States contend with just their capital and perhaps one other town, Delta battles with five other towns that are as urbanized or more urbanized than Asaba.

“Besides, the cost of infrastructural development in Delta State is far more than what obtains in many states of the federation because of the peculiar terrain of the riverine nature.

“However, there is hope and greater prospects for the State because of the efforts of successive administrations, as well as the peace, unity and trust that has been engendered over the years.

Macaulay enjoined Deltans to cooperate with the incumbent Governor and other leaders, as well as urged the civil service to be alive to its responsibilities to enable the State witness more growth.

“Congratulations to all the governors because they have all done well, and double congratulations to the incumbent, His Excellency, Dr. Ifeanyi Okowa for witnessing the 30th anniversary of the State creation while in office. 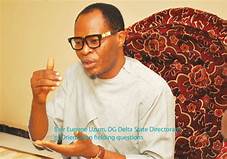 PDP to Delta Central monarchs: Thank you for seeing value in Okowa