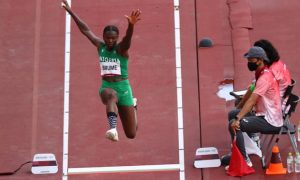 With one fine leap in her long jump event, Ese Brume ended Nigeria’s wait for medal, nine days into Tokyo 2020 when she finally won a medal at the games. 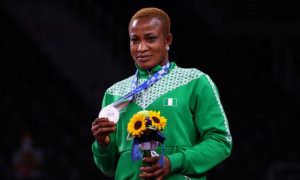 Brume’s opening jump of 6.97 metres in the women’s long jump final at the Tokyo Olympic Stadium on Tuesday morning was enough to keep her in the bronze medal spot behind Germany’s Malaika Mihambo, who won gold, and Brittney Reese of the USA. Ten hours later Nigeria had doubled its tally as Blessing Oborududu took silver in the freestyle wrestling at the Makuhari Messe Hall on Tuesday night, after a storming run to the final.

It will have come as a moment of succour for Team Nigeria – not to mention outright relief – after an Olympic campaign that has veered between farce, failure, unrest and beneath it all a sense of gruelling institutional muddle.

And who knows now what the immediate future might now have in store for Brume and Oborududu? Before the Games the President of the Athletics Federation of Nigeria, Ibrahim Shehu-Gusau, had promised to buy Enoch Adegoke an SUV if he won gold in the men’s 100m – and not just any old SUV, but a new or only partially used one.

“I am talking about a tear rubber SUV, not a fairly used vehicle,” the president promised, although the offer came on a sliding scale for anything less than gold, raising the prospect of a high mileage hatchback or an ex-display crossover for Nigeria’s late-breaking medallists.

More likely Brume’s thoughts will be with her teammate and athletic hero Blessing Okagbare, whose disqualification after testing positive for Human Growth Hormone on the day of the women’s 100m semi-final has been the most high profile of Nigeria’s Olympic wounds.

The same day Okagbare had been vocally supportive of 10 Nigerian athletes disqualified from the Games after failing to register the correct number of out of competition doping tests – a responsibility that lay, the athletes say, with their federation.

There were protests in the Olympic village from the Nigerian athletes, none of whom had actually failed a test. Chioma Onyekwere, a discus thrower, said: “I am beyond heartbroken. This feels like a bad dream that I can’t wake up from.”

That sense of disintegration was already lurking in plain sight at the opening ceremony, which saw some members of the Nigeria team walk out in mismatched sports wear in a bizarre shemozzle over kit suppliers. Team Nigeria has a $2.7m kit deal with Puma. Shortly before the Games the sports ministry announced a side deal with AFA Sports. The Department of State Services has since cleared Shehu Gusau of any criminality, which is good.

That strange start has been largely overshadowed by results, albeit not in a good way. Adegoke, who is 21 years old, was simply unlucky, storming his way to the final of the 100m, then collapsing with a hamstring tear midway through the race. He can be proud of his Games, as can his fellow 100m man Usheoritse Itsekiri, who was also left writhing on the track after a similar end in his own semi-final. Divine Odoruru, the Nigerian record holder, had already been disqualified for a false start. So far, so Nigeria-at-Tokyo-2020.

Elsewhere the team sports have offered a startlingly poor return. Across, basketball, table-tennis and badminton the combined victory tally reads played 16, lost 15. A lone ping-pong win for Offiong Edem is the only tangible reward for the combined efforts of 31 of Nigeria’s 55 Olympians. There is a wider point here. So many of the Olympic sports are based in what are historically European or North American disciplines. Many African nations have very little established structure or performance culture in that spectrum of events from dressage to canoeing to sailing.

Still, though, the real oddity is that gold for Oborududu would have made it just four Nigerian gold medals since their first Games in 1952. It is a startling lack of success for a nation with such a strong sporting culture, not to mention Africa’s largest economy and a population of 201 million.

There is a disjunction here. Nigeria has footballers in every elite league. Eight of its 12-strong men’s basketball team are current NBA players. The diaspora has, via second generation citizen’s of Nigerian descent, provided a full hand of A-list athletes, from Anthony Joshua to Bukayo Saka. There is no logical reason why a vast and committed sporting nation should have such an unremittingly weak Olympic presence.

Except, of course, for the obvious ones: poor administration, absent investment and shabby, self-interest from those in power. Nigeria has been losing athletes for years, from Glory Alozie, who switched to running for Spain after some traumatic domestic experiences in 2002, to Francis Obikwelu, who found a home in Portugal, to a trickle of newly-converted Bahrainis and Qataris.

There has been talk in Nigeria of a lack of accountability, with a confusing lattice of responsible authorities. Meanwhile the perks of IOC status, of travel and hospitality, of living that Olympic life on the four-yearly cycle remain unaffected for those in charge.

It is to be hoped the enduring image for Nigeria’s Olympics is that late-breaking glory for Brume, and Oborududu. Although the placards of the disqualified athletes – “Dreams Shattered”; “Why should we suffer because of someone else’s negligence?” – might tell a more complete story. Not to mention the words of Brume shortly after her medal leap, in between announcing her plans to celebrate by visiting the 5,000 acre mega-church of the super-pastor David Oyedepo. Asked for one key reason behind her own recent improvement, she said, “I had to move from Nigeria to the States.”