Delta State PDP has cautioned the opposition All Progressives Congress, APC in the State, to desist from its now common penchant of dwelling on unfounded speculations and using cheap, unsubstantiated lies to address every issue, thereby, spreading dangerous misinformation every time, in order to score cheap political points.

Accusing the APC in Delta State of intellectual laziness, PDP urged the opposition party just keep quiet and save themselves the embarrassment of being corrected all the time and made to look like educated illiterates, because of their intellectual laziness and lack of effort to seek the facts of any matter they wish to raise issues over, before going to press with their puerile and amateurish press releases.

This admonition was contained in a Press statement, issued by Dr. Ifeanyi Osuoza, Delta State PDP Publicity Secretary in response to APC’s latest press release, titled: “Delta APC to Okowa: You are putting the future of our students in jeopardy” signed by Sylvester Imonina, Esq., Publicity Secretary (Caretaker) APC Delta State, which as usual, was another failed, alarmist attempt to whip up unnecessary sentiments that have now crashed woefully and exposed the outright lies and half-truths on which the APC publicists have been wallowing in for so long.

Dr. Osuoza’s statement, reads: “The Delta State PDP is once again compelled to respond to the latest diversionary and distasteful press release by the publicists of the factional Caretaker APC in the State and set the records straight over the three new universities in State.

“Fortunately and quite appropriately too, our very cerebral and erudite Professor Patrick Muoboghare, Delta State Commissioner for Higher Education, has already offered a precise, unambiguous, facts laden and succinctly articulate response to the APC’s mishmash of a press release and that may suffice to adequately humble and silence the APC and their cheap lies on this matter.

“However, it’s a truism that only illiterates and anti-progressives would decry and lament the establishment of new schools, no matter at what level, on the ground that it will lead to the extinction of old ones. The sheer backwardness of such reasoning has once again exposed how shallow the thinking of APC is, as a party which must play politics with every issue to gain some modicum of petty relevance.

“Interestingly, there’s a curious development in the National Assembly, which has left a bitter taste in the mouth of many Deltans, over how the APC treats Education in Delta State, for as we recall, Hon. Ossai Nicholas Ossai of PDP, representing Ndokwa/Ukwuani Federal Constituency of Delta State, had previously sponsored a bill for the establishment of a Federal Polytechnic in Kwale for his constituency, in the House of Representatives, for the benefit of his people and Nigerians.

“The bill which was transmitted by the House in 2020, was sent to the Senate for concurrence, but for reasons best known to them, the Senators stepped down the bill, but curiously enough, a similar Bill resurfaced in the Senate seeking to establish a Federal Polytechnic in Oregun by the Deputy President of the Senate, Ovie Omo Agege also in his own clan in the same Delta State, and has so far been given an accelerated hearing, in a classic case of cutting off your nose to spite your face for political gains.

“It is indeed important to remind the APC that one of the most iconic global leaders who has been referenced glowingly in leadership circles, is Lee Kuan Yew, the Prime Minister of Singapore from 1959 to 1990, whose fame is grounded on the rapid, phenomenal and systemic transformation of the small island nation in a manner that it leaped from 3rd to 1st world over a relatively short period.

“The defining catalyst which galvanized this accomplishment in Singapore was achieved partly through the concerted and strategic efforts of providing qualitative education to young Singaporeans who were to later take over the mantle of leadership from Lee Kuan Yew and his epoch-making team and all these are documented in a seminal book authored by the former Prime Minister himself, titled  “From Third World To First. The Singapore Story: 1965-2000”.

“We are indeed disappointed to note that the APC, in this 21st century of information technology and digital dominance, is using a word like “de-market” in a discussion involving academic Community. It is appalling that a group of people can still exhibit such crude mercantilism in an age when intellectual synergy and creative innovation are driving domestic and global processes in all spheres especially in Education.

“It beats logical imagination to fathom how the APC can, even in its wildest streak of uncoordinated ramblings, imagine that an already existing institution, which is well funded and renowned with posting impressive academic performance, would suddenly become extinct with the establishment of new institutions.

“Professor Patrick Muoboghare, has already made the salient point that the establishment of the Universities of Ife, Lagos, UNN and Ahmadu Bello in Zaria between 1960 and 1962, did not in any way reduce the status of the University of Ibadan, which was established in 1948.

“As at the end of 2020, there were 43 Federal Universities and 48 State Universities across the Country, yet the old ones are still waxing strong and holding their own with the pride and authority achieved over the years of providing quality instructions in character and learning and churning out academic personnel that has pioneered and sustained the new Universities from take-off till date.

“Besides, is it not kind of embarrassing and shameful that Delta State, which has always been rated as a high intelligent quotient State, has only one comprehensive academic curricular University?

“We will not even join issues with the APC on the pedestrian logic that the movement of lecturers from one institution to another will ultimately lead to the extinction of the former, but suffice it to say that hundreds of Doctoral students graduate in every convocation year, from the academic departments/disciplines offered by every University and many of them are potential lecturers.

“Again, it is impossible to even imagine that a University can be “de-marketed” as if it is a consumable product, instead of its proper function as a citadel of learning, when even the existing tertiary institutions are still not sufficient to cater for the admission needs of the rising population of Delta teenagers hungry and yearning for higher education every year.

“To put this dire need in proper perspective, it will be imperative to inform the APC that in the 2019/2020 academic session, over 25,000 candidates took Delta State University, Abraka, as the first choice. Out of this number, over 22,000 candidates qualified and applied for and wrote the post UTME examination, but only 4,854 could find space, leaving the remaining 21,042 candidates stranded and almost hopeless.

“Even the three full curricular option Universities would have absorbed more than half of the stranded candidates, the sad reality is that they would still not be sufficient given the numbers that apply for admission every year, which even the APC has admitted. It follows therefore that, assuming but not conceding to the warped mindset of the APC, no amount of incentives would ever be sufficient to de-market a University, talk less of it going into extinction.

“The administration of Governor Ifeanyi Okowa must therefore be applauded for possessing both the foresight and political will to do what is right and necessary by providing excellent alternatives for qualified and ambitious children, who otherwise would have been stranded, with the establishment of new universities, by upgrading three existing tertiary institutions to full-fledged universities.

“We want to place it on record too that since the National Universities Commission, NUC, approved the three Universities viz:  the Delta State University, Agbor; Denis Osadebe University, Asaba and the Delta State University of Science and Technology, Ozoro, the Governor Ifeanyi Okowa administration has put all hands and resources on deck to ensure that all of them are fully prepared, both in terms of personnel and infrastructure, to commence full academic and administrative operations on schedule.

“Governor Okowa himself, in his impressive typical pragmatic, hands-on style has embarked on regular on-the-spot assessment tours to the individual institutions to make sure that work is going according to specifications and in line with global best practices.

“So, when the APC publicists sit down wherever they get their warped inspiration from and spew garbage press statements like: “Delta APC to Okowa: You are putting the future of our students in jeopardy”, laden with all manner of falsehoods, half-truths, and misinformation, it behoves us to whip them in line with facts, which they are too lazy to research and to set the records straight.

“Governor Ifeanyi Okowa has pledged that the three Universities will commence and become fully operational on schedule and no stone will be left unturned, including getting the private sector to invest and participate in the determined drive towards providing qualitative and accessible Education to Delta children, in the collective effort to build a Stronger Delta for Deltans.

PDP! Power to the People!!! 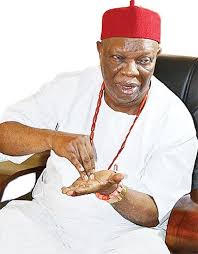