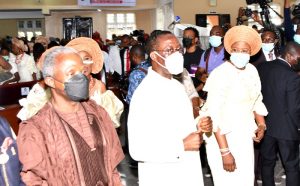 Vice President, Prof. Yemi Osinbajo (SAN), has described the late Pa Arthur Okowa, as a foremost educationist and committed public servant who contributed to the growth and development of education in the country. 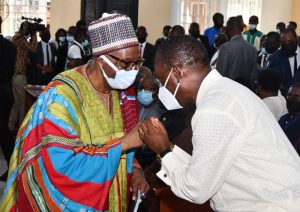 He noted that the story of educational development of many communities in Delta and Edo States cannot be told without the mention of Pa Okowa.

“I am honoured to join so many from all over the country and the rest of the world to celebrate the life and times of an outstanding pioneer educationist and a committed public servant, Pa Arthur Okowa.

“He was also a great politician with the UPN under the leadership of the late sage, Chief Obafemi Awolowo,” he said.
The Vice President said the legacies left behind by the deceased would last forever.

“There is no guarantee that material wealth can last a generation but a legacy of character and faith in God lasts forever.

“The nation and the state benefited and still benefit from the contributions of Pa Okowa with his son becoming Governor of Delta.

“The Owa-Alero community, Delta and Nigeria has been blessed with the life and times of Pa Arthur Okowa,” Osinbajo added.

Chief mourner and Governor of Delta, Senator Ifeanyi Okowa said his father would have been 89 years today, but he passed on January 28.

He said his father was a great teacher, politician and community leader whose disciplinary actions contributed immensely to the success of his children in life.

“We give thanks to the Lord our God for showing him mercy to have lived up to 88 years.

“I thank Vice President Yemi Osinbajo, my dear brother governors and distinguished guests for coming to celebrate the life and times of our great father.

“Our father lived a worthy life and we thank God for his life. He was a teacher and many people know him to be a great disciplinarian and that discipline impacted greatly in our lives.

“He played his part to educate people in this country particularly in this part of the world. He was also a great politician and I am grateful that he guided me through difficult and turbulent times in politics.

“He worked very hard for the creation and growth of the Ika Diocese of the Anglican Communion. He retired home at 80 and rose to become Okpara-Uku of Idumebo Quarters, Owa-Alero.

“He lived a good life of truth and discipline and as his children, we are happy that we went through his disciplinary measures.

“On behalf of our entire family we thank you for coming to celebrate the life and times of our great father,” Okowa stated.

Archbishop Metropolitan and Primate of the Church of Nigeria Anglican Communion, Most Rev’d Henry Ndukuba in a sermon titled “Seek ye the Lord with the prevailing faith” said the faith that prevails is the one that is anchored in the name of God.

The Primate said the late Pa Okowa left a great legacy as an astute teacher and community leader and urged the children to work hard in preserving the legacy left behind by their great patriarch.

He urged Christians to repent from their evil ways as there is no repentance in death.

He noted that sin, sickness, lust, death and judgment were the lonely roads that Christians must pass through in the course of life but urged them to remain strong in faith because God will be with those that are in faith.

“Sinners are alone when they thread the path of sin, sickness, lust, death and judgment, but those who are in faith will go through the challenges successfully.

“The Excellency of power belongs to God because when you get power through false means you will require doing evil things to maintain such powers, but when you seek power through right means, the one who owns the power will preserve it for you,” he said 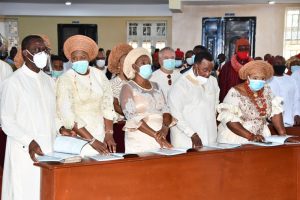