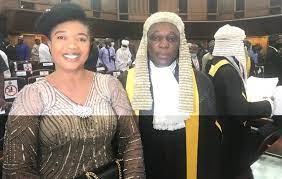 Indication to this came from a press statement issued on behalf of Dr. Mrakpor, the immediate past Delta State attorney general and commissioner for justice by his media aide, Akpovoke Otiti in which it was stated that “ the marriage between Dr. Peter Adogbejire Mrakpor SAN and Honourable Joan Onyeamachi Mrakpor (nee Ugbah) broke down finally since July 2020 due to irreconcilable behavioral pattern.”

It is recalled that Peter Mrakpor and wife, Joan Onyemaechi are the parents of three bundles of joy which they had together as a set of triplets.

THE Attention of Dr. Peter Adogbejire Mrakpor SAN, has been drawn to publications on Facebook and other social media platforms about a purported Pregnacy  /Child delivery for him  by a membet of the Ugbah Family of Ubulu Uku alleged to be a sister/Cousin/maid to Hon. Joan Onyeamachi Mrakpor ( nee Ugbah).

Dr. Peter Adogbejire Mrakpor SAN, wishes to inform all concerned that the said allegation is totally false and satanic agenda to destroy his hard – earned reputation  as no person is pregnant  for him or has a child for him as falsely alleged by a desperate group of disgruntled  politicians and enemies.

It is pertinent  to state that the marriage between  Dr. Peter Adogbejire Mrakpor SAN and Honourable  Joan Onyeamachi Mrakpor (nee Ugbah) broke down finally since July 2020 due to irreconcilable behavioral pattern.

Dr. Peter Adogbejire Mrakpor SAN  has instructed his solicitor to commence legal proceedings  against any further publications about such evil allegation and to formally dissolve the said failed marriage .

Editors at banneronlinenews.com appeals passionately to men and women of good and Godly conscience to please, help intervene to save this marriage from total collapse for the sake of the offprings.

TRIBUTE – Odia Ofeimun at 70: Let’s toast to the health of the Master Poet