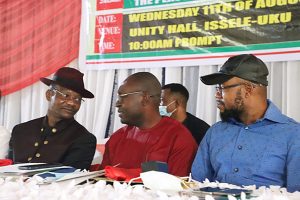 Delta Governor, Sen. (Dr) Ifeanyi Okowa, on Wednesday, charged youths in the state to leverage the various skills acquisition and entrepreneurial development programmes of his administration to extricate themselves from poverty.

He made the call while opening the maiden annual retreat of the youth wing of the Peoples Democratic Party (PDP), Aniocha North Local Government Area chapter at Unity Hall, Issele-Uku.

The governor stated that youths endowed with skills as entrepreneurs were the leaders of contemporary and competitive global economy.

Represented by the Commissioner for Information, Mr Charles Aniagwu, he commended the organisers of the programme for the laudable initiative, adding that youths’ issues were very central to the heart of his administration.

“Our administration believes that the youths are the leaders of today and not tomorrow, as most people believe.

“I am very happy over the array of resource persons you have assembled here today. Individuals who have had one role or the other to play as long as empowerment of the youth is concerned.

“I believe that those who thought it wise to put this programme together were not joking or playing politics.

“The party chairman mentioned earlier that after this programme, the youth would have learnt how to catch their own fish and not continually depend on someone to give them fish,’’ he said.

The governor added that what Nigeria had suffered as a nation was the idea of individuals who believed that one would “always bring fish to them and we have lost a lot of skilled manpower through this idea.

“But, moving forward, I am sure that this idea will change when the wealth is circulated within our economy.

“When we came in as a government, we looked at it that employment does not mean employing people into government offices and paying them even when there are no vacancies.

“We introduced these programmes where individuals will become entrepreneurs. I want to tell you that the moment you are skilled, you are empowered and you will have the ability to take part in decision-making and being able to have a say.

“When there is money in your pocket, it gives you the power to have a say in the scheme of things.

“Poverty makes you afraid of the truth so that the man who will feed you does not change his mind. So, being trained and becoming an entrepreneur helps you to regain that freedom which democracy has given to you.”

In a keynote address, the Commissioner for Youths Development in the state, Comrade Ifeanyi Egwunyenga, said that youths were the drivers of development in any economy, adding that their understanding of the role of youths in the scheme of things was key.

He pointed out that the Stronger Delta agenda of Okowa’s administration was aimed at developing the non-oil sector through up-scaling of wealth creation programmes for youths in the state.

Welcoming guests to the retreat earlier, PDP Youth Leader in Aniocha North, Mr Richard Anonye, had said that youths were instrumental to achieving the Stronger Delta Agenda of the Okowa administration.

He said that the retreat provided an opportunity for youths to be enlightened and educated, adding that through the acquisition of entrepreneurial skills, they could become leaders who are instrumental in achieving a stronger Delta Agenda.

The retreat featured panel discussion, interactive sessions as well as questions and answers.

The retreat had “Today’s Entrepreneurs, Tomorrow’s leaders: The Place of Youths in the Stronger Delta Agenda” as theme. Government functionaries at the event were member representing Aniocha North Constituency in the House of Assembly, Mr Emeka Nwaobi and Senior Policy Adviser to the Governor, Professor Sylvester Monye.