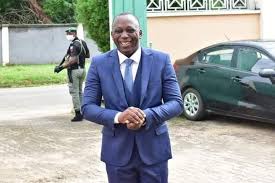 Chief_editor September 2, 2021September 2, 2021
There are indications that the Legal Practitioners Disciplinary Committee (LPDC) has cleared the immediate past Attorney-General and Commissioner for Justice, Delta State, Dr Peter Adogbejire Mrakpor SAN, from charges of abuse of power and usurpation of the power of the Attorney-General of the Federation brought before it by Chief Mike Chukwuka Nwukoni.
In the petition submitted to the LPDC on the 30th of October, 2020 and titled “RE CHARGE NO. A/2060/2019: INSPECTOR GENERAL OF POLICE V CHIEF COLLINS UCHE AFUWAH. A CASE OF FLAGRANT ABUSE OF OFFICE BY THE HON. ATTORNEY GENERAL OF DELTA STATE AND USURPATION OF THE CONSTITUTIONAL POWERS VESTED IN THE HON. ATTORNEY GENERAL OF THE FEDERATION PURSUANT TO SECTION 174 OF THE CONSTITUTION OF THE FEDERAL REPUBLIC OF NIGERIA,” the petitioner claimed that the Respondent, Peter Mkrapor SAN while occupying the office of the Honourable Attorney General of Delta State and Commissioner of Justice, took over the prosecution of Charge NO: A/2060/2019, which bordered on federal offence from the Inspector General of Police and thus usurped the powers of the Honourable Attorney General of the Federation.
The complainant also further claimed that the Silk while he held sway as Attorney – General abused his office and acted ultra vires his powers when he directed that the Certificate of Chieftaincy issued to the Applicant be withdrawn, and also signed terms of settlement in Suit No: A/49/2019 to that effect and that these are allegedly contrary to the judgment of the Supreme Court in SC/55/2010.
The LPDC however, after a close look at the claims of the former Attorney-General backed with evidence that he at no time usurped the powers of the Attorney-General of the Federation, said that in the case under review, he acted within the ambits of his power as provided for in Section 211 of the Constitution of the Federal Republic of Nigeria 1999 as amended which empowers the Attorney General of a State with the power to take over and continue any criminal proceedings that have been instituted by any other authority or person.
He further cited that the power of the Attorney General of a State has been affirmed by the Courts in a plethora of cases, citing the case of AJAKAIYE v FRN (2010) 11 NWLR [PT. 1206] 500 @ 526 paras B-D, were the Supreme Court held that “It is trite that by virtue of the provisions of sections 160(1)(a)(b) &(c) and 191(1)(a)(b) &(c) of the 1979 Constitution (supra), the Attorney-General of the Federation and of the State, as the case may be, have been conferred with unequivocal powers to institute and undertake any criminal proceedings in any court of law in Nigeria; to take over, continue or discontinue at any stage of the proceedings of any criminal proceedings that may have been instituted or undertaken by any person in a court of law.”
The former Delta chief legal officer also adduced that the petitioner was arraigned before the High Court of Delta State by the Inspector General of Police while himself while occupying the office of the Honourable Commissioner for Justice and  Attorney General of Delta State, received 3 petitions from the Counsel to the Defendant in the said suit complaining about the lack of requisite powers of the Prosecution in the aforementioned case and also requesting him as the AG of Delta State to exercise the powers vested on him by Section 211 of the Constitution to take over the prosecution of the case.
The SAN submitted in his petition to the LPDC that upon reviewing the aforementioned Petition as the Attorney General of Delta State and following a legal opinion issued by the Department of Public Prosecution to the Respondent which affirmed that the Respondent was within his powers to take over the prosecution from the Police, the Respondent under his constitutionally guaranteed powers under Section 211 of the Constitution wrote a letter dated 19/10/2020 to the Prosecution in that suit notifying that his office has taken over the prosecution of the matter and also requested that the original case file be forwarded to the Ministry of Justice.
He posited that the request for the case file was in pursuant to the powers vested on him as the Attorney General by Section 106 (3) of the Administration of Criminal Justice Law, Laws of Delta State 2017.
Also, Section 107 of the ACJA empowers the Attorney General of Delta State to direct and take responsibility for the prosecution of all offences in the State.
The former attorney-general also wondered in his submission why he will be accused of usurpation of power when the Attorney-General Federation issued a fiat to the A.G. Delta State to prosecute federal offences that arose within the latter’s jurisdiction.
He argued that the authority can only be challenged by the attorney-general of the federation and not the petitioner.
The LPDC during its sitting on Monday, 30th August, 2021, after considering the plea of the former attorney -general unanimously agreed that Peter Mkrapor SAN as the attorney-general of Delta State did not usurp the powers of the Attorney General of the Federation  because the latter had issued a fiat to him to prosecute all federal offences that may arise in his jurisdiction.
The committee also ruled that the Silk as Attorney General of Delta State had constitutional powers to take over proceedings instituted by the police.
It also ruled that the petitioner failed to prove that the former attorney-general abused his office in the course of his performance of his duties as the Honourable Attorney General of Delta State and Commissioner of Justice and therefore cleared him of all charges.