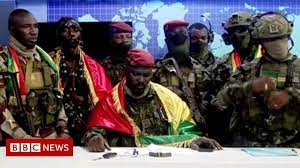 CONAKRY, Sept 6 (Reuters) – The leaders of a military coup in Guinea promised on Monday to set up a transitional government of national unity after ousting President Alpha Conde and dissolving his cabinet.

Sunday’s coup, in which Conde and other top politicians were detained or barred from travelling, is the third since April in West and Central Africa, raising concerns about a slide back to military rule in a region that had made strides towards multi-party democracy since the 1990s.

The takeover was widely condemned by international powers, placing pressure on the new military leaders to offer a plan beyond the toppling of the old order, and to reassure investors that Guinea’s significant ore exports would not be cut.

“A consultation will be carried out to define the major framework of the transition, then a government of national unity will be put in place to lead the transition,” coup leader Mamady Doumbouya, a former French legionnaire officer, told a meeting of Conde’s ministers and senior government officials.

“At the end of this transitional phase, we’ll set the tone for a new era for governance and economic development,” he said, flanked by armed soldiers in red berets.

Doumbouya did not say what the transition would entail or give a date for a return to democratic elections.

His seizure of power was buoyed by widespread disaffection with Conde, 83, who promised stable democracy but once in power violently silenced opponents, failed to reduce poverty and last year decided to run for a third term in power – a move many said was illegal.

The coup was welcomed by many, but spooked the mining sector. Guinea holds the world’s largest bauxite reserves, an ore used to produce aluminium. Prices of the metal shot to a 10-year high on Monday, though there was no sign of supply disruptions.

In an effort to quell fears, Doumbouya said sea borders would stay open so mining products could be exported. A nightly curfew now in place does not apply to the mining sector, he said.

“I can assure business and economic partners that activities will continue normally in the country. We are asking mining companies to continue their activities,” he said.

Light traffic resumed, and some shops reopened around the main administrative district of Kaloum in Conakry that witnessed heavy gunfire throughout Sunday as the special forces battled soldiers loyal to Conde. A military spokesman said on television that land and air borders had also been reopened.

Still, a crackdown was evident. Doumbouya prohibited government officials from leaving the country and ordered them to hand over their official vehicles.

The politicians who attended Monday’s meeting were later escorted by soldiers in red berets through a jeering crowd to the army unit’s Conakry headquarters.

Amnesty International, in a statement on Monday, called on the coup leaders to clarify the legal basis for Conde’s detention, and to free those Conde had arbitrarily detained in the months surrounding last year’s election.

Regional experts say however that unlike in landlocked Mali where neighbours and partners were able to pressure a junta there after a coup in August 2020, leverage on the military in Guinea could be limited because it is not landlocked and also because it is not a member of the West African currency union.