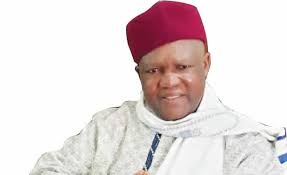 Giving a  vivid account of how Dr. Obadiah Mailafia lost the battle to a yet-to-be disclosed ailment, the MBF through its National Publicity Secretary, Dr. Isuwa Dogo, alleged conspiracy and lackadaisical attitude of medical personnel as responsible for the untimely death of the presidential candidate of the African Democratic Congress, ADC.

According to statement issued in this regard: ‘’The death of the former Deputy Governor of the Central Bank of Nigeria, CBN, at the University of Abuja Teaching Hospital Gwagwalada, Abuja,   this morning(Sunday) came to us as a great shock.

‘’Arising from various enquiries from Nigerians over the circumstances of his death, the Forum wishes to state as follows: That Dr Mailafia arrived Abuja last Sunday September 12, 2021 from Akure and was received at the Nnamdi Azikiwe International Airport by his wife.

‘’On arrival at home, the wife noticed he was not in the best of health conditions and seemed to be suffering from malaria. After three days of treatment without signs of improvement, he went to the CBN Hospital on Friday September 17, 2021 where he was shabbily treated. It took the intervention of a senior medic who immediately placed him on oxygen and admitted him.

‘’Dr Mailafia’s was later given the option of choosing three hospitals: Gwagwalada Hospital, National Hospital and EHA Clinics. The wife opted for the third choice. On arrival at the EHA Clinics, the wife was subjected to yet another moment of anxiety as it took a direct order from the top management of the hospital to accept him.

‘’After few hours of treatment, the EHA Clinics told the wife that it was expedient to transfer the former CBN Deputy Governor to Gwagwalada as the clinic was not fully equipped to handle the case.

‘’The wife opposed the decision and insisted that she was opposed to the idea of taking her husband to Gwagwalada. Mailafia’s wife only succumbed when the consultant assured her that nothing bad will happen to her husband.

‘’Yesterday, Saturday September 18, 2021, Dr Obadiah was transfered to Gwagwalada. on arrival, the name of the doctor that was billed to attend to Dr Mailafia was not on duty. Even when an attempt was made by foreign health consultants to save the situation, the doctor on duty got angry and said he was not obligated to listen to any foreign consultants that had been brought into the matter with the sole purpose of ensuring nothing   goes wrong.

‘’Wife of the former CBN Deputy Governor was asked to pay the sum of N600,000 as deposit even when it was a referral case, with accruing medical bill to be settled by the CBN. At a point, Dr Mailafia complained over his breathing problems and pleaded with the doctors to place him in a ventilator. The doctors flatly refused.

‘’Even after the doctors declared Dr. Mailafia dead, foreign consultants who were brought into the matter through Dr Mailafia’s son that is   living abroad, had directed a family member who is a medical professional, with the wife of the CBN Deputy Governor, to mount pressure on the chest of Dr.   Mailafia for   resuscitation and thereafter place him on a life support.

‘’The doctors in Gwagwalada refused all entreaties by the family members of Dr Mailafia to follow the advice of the foreign consultants, insisting that they have already pronounced him dead. Even when the wife could feel the pulse of her husband, the doctor flatly declared there was nothing they could do since they had already pronounced him dead.

‘’While the above narration sums up the circumstances under which Dr Mailafia died,  we still await the result of the actual cause of his death. As a nationalist and patriot that he was, Dr. Mailafia   was completely dedicated to the emancipation of ethnic nationalities from the clutches of oppression.”

A renowned development economist and social critic, Obadiah died yesterday morning after a brief illness at the National Hospital Abuja.

Spokesman of the Southern Kaduna Peoples Union, SOKAPU, Luka Binniyat, who confirmed Mailafia’s death, said: “Following his harassment by the Department of State Security Services, DSS, he had been taking refuge from place to place. The last place he went to take refuge is Markudi. Yesterday (Saturday), he took ill and he was rushed to the hospital that he normally attended in Abuja.  This morning (Sunday), he was pronounced dead.”

He was born on December 24, 1956, in the Sanga Local Government Area of Kaduna State, graduated top of his class at Ahmadu Bello University, Zaria, in 1978 with a B.Sc. Honours Social Sciences degree (Politics, Economics, and Sociology) and had an M.Sc. from the same institution.

He joined partisan politics in 2018 and has consistently criticized the political and economic policies of government, seeking a reformation that would bring succor to the populace.

Mailafia was appointed deputy governor of CBN in 2005 from the African Development Bank, AfDB, where he served as the chief economist responsible for Strategic Planning and Corporate Reporting.

Reacting, the Middle Belt Forum, MBF, said his sudden demise was great loss of voice in the struggle to emancipate Nigeria.

The National President of MBF, Dr. Bitrus Pogu, among others, said: “The death of Dr. Mailafia is a great loss to the Middle Belt and the whole of the country particularly at a time when we need voices like his; he is one of the people who could talk or fearlessly tell truth to power, we lost a patriot.

“His death has created a great vacuum that will be difficult to fill. Painfully while we were struggling along with our brothers in other parts of the country to ensure that Nigeria is restructured, we, some few months back also lost Yinka Odumakin and now it is Mailafia; it hurts.

“It’s a great loss to all of us and we are just praying that in spite of all odds that God will comfort the country and the family he left behind because we have lost a great voice not just in the Middle Belt but the entire country in the struggle for the emancipation of Nigeria.”

Describing Mailafia as a patriot whose views were tailored towards a better Nigeria, Ohanaeze Publicity Secretary, Chief Alex Ogbonnia,  said:  ‘’We, the Ohanaeze Ndigbo, are shocked at the death of Dr Mailafia. We are shocked by the death of a man who had shown a detribalised disposition towards the affairs of Nigeria. He was a rare patriot, his views were bent towards bringing a better Nigeria.

‘’We feel bad that we are losing that voice at a time it mattered most. As Nigeria approaches the 2023 general elections, such a strong voice is needed to shape and put things right.

‘’Ohanaeze condoles the immediate family of Mailafia and the people of Kaduna State for this colossal loss. It is very unfortunate. Ohanaeze will participate in his burial. He showed great concern for the oppressed. He was an ally.’’

His lawyer, Yakubu Bawa who was with him during his trying moment with the Department of State Security, DSS, added: “This is very shocking, a devastating news, very catastrophic because we never thought this will happen at this time, but we submit to God’s will. It is hurting, only God will give us the grace to bear this great loss.

“It was a brief illness, what caused his death was brief, he was not diabetic.”

Also, a mentee, Ralph Madugu, described his demise as “a terrible blow difficult to endure”.  His words: “You were my role model and a mentor going by your intellectual endowments that God deposited in you. You were indeed a patriot and a nationalist to the core. You stood for the downtrodden; you stood as a voice for the voiceless even when saying the truth hurts.

“You spoke truth to power… You were a messenger who was not celebrated but now that you are gone, your messages of truth will continue to remain with those of us who cared to listen. You wrote your name in gold and imprinted them on the sands of time.

“A reservoir of knowledge is gone… a loudest voice of the masses is no more. Though your voice is mute, but not forever, Adieu OBM.”

Also reacting, a frontline politician and international businessman, Gbenga Olawepo Hashim, described his death as a “great loss to Nigeria and his beloved family that he loved dearly”.

Olawepo-Hashim in a condolence message, said: “I just got off the phone with Dr. Bitrous Porgu, President  of the Middle  Belt Forum to confirm the distressing news popping up on my phone. It is true we have lost Obadiah Malafia,”

Olawepo-Hashim recalled that they were screened together by the elders of the Middle Belt in 2019 presidential run, stating that “he did remarkably well; his voice on national issues which kept on ringing until the last few days will be missed”.