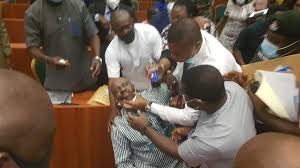 Nigeria is daily regressing into a comedy of errors. Its a moving circus. The leaders are the clowns on epic performance, while the citizens watch in awe as spectators. There is a clique, which goes by the sobriquet, ‘cabal’, who in reality are the puppet masters. Like a drunken danfo bus driver plying our mainly potholed and dilapidated roads, the cabal insist they must run the streets on overload. And all the people do is gasp for breath – gated breaths!

While the wheel of progress has since turned in the opposite direction, there seems to be some form of acquiescence to the unfolding disorder. No one can be said to be truly in charge of the ship of state; we are held in place by unexplained forces which ensure that the ship does not capsize. Again, the people are bemused by the conductor standard before them, directing the opera and certainly not making sense.

Perhaps, its because we are all high on spook. Or it is a reflection of our collective amnesia. It may well be that it has become engrained in our DNA. We choose to forget easily and simply move on and hope things would get better. Most Nigerians refuse to act in the face of brazen provocation; even when you shit on them! Nothing shocks us in this part of the world anymore.

Nigerians prefer the convenient story: tell it to deodorize their senses and ego. That way, morality becomes circumstantial and there is no moral code that binds the people. It is now everyone to himself and God for us all. And the beat goes on ad infinitum.

Today, we are regaled with snippets from the so called forensic report on the Niger Delta Development Commission (NDDC) submitted by the Minister in charge of the Niger Delta Ministry, Godswill Akpabio to his counterpart in the Justice Ministry, Abubakar Malami (who Nigerians have conveniently agreed epitomes or aggregates to the Federal Government).

Suddenly, we are told that over N6 Trillion (six trillion naira) has been spent by the NDDC since its inception, in addition to 13,777 contracts allegedly compromised, with the commission operating 362 bank accounts. The revelation is in spite of the fact that the actual content of the forensic report has not been made public.

Predictably, Nigerians are already threatening that heads must role for the alleged sleaze. They are baying for blood like spectators at the firing squad, which in local parlance is called ‘Bar Beach Show’. Any moment soon, you would imagine that staccato shots would emit from assault rifles to send the convicts tied to the pole to their early graves.

But, the puppet masters providing the snippets into the audit report know there would be no shots. They know it is a script meant to divert attention from agitations arising from the unconstitutional, wicked and devilish signing into law of the Petroleum Industry Act (PIA) and the non constitution of the NDDC board. Rather than deal with the core issues, the cabal opted to feed the oppressed people of the Niger Delta with another convenient and salacious story of stealing.

Of course, it was a similar trick deployed to deflect attention on the brazen stealing which took place in the guise of Covid-19 relief package at the NDDC. Talk about a forensic report only emerged after the Auditor General of the Federation exposed the thieves residing in the commission. Definitely, no reasoning individual can be swayed by such buffoonery!

Nigerians would recall that was a management appointed by President Muhammadu Buhari to superintend over the affairs of the commission found to have dipped its fingers in the till. Acting Managing Director, Prof. Kemebradikumo Pondei, along with other directors were accused of presiding over a heist amounting to N139.3 Billion and other questionable spending amounting to over N815 Billion.

Akpabio, Prof Pondei and one of the other directors in the Interim Management Committee (IMC), Hon Cairo Ojougboh were simply unleashed by the conductor in the Aso Rock Villa to thrill the National Assembly probing the malfeasance and the entire nation. What a show of shame it became.

Soon, Akpabio opened a ‘can of worms’ revealing that lawmakers in the National Assembly were the largest beneficiaries of contracts in the NDDC and therefore directly responsible for the nonperformance of the federal agency and consequent allegations of corruption.

Thereafter, Prof Pondei mounted the dais and delighted us on ‘modern fainting techniques’ and to ‘Off the Mic’ when you are accused of stealing. This was closely followed by brilliant display by Ojougboh who told everyone that Nigeria would burn if he opened his mouth or published names of those who have stolen the commission blind.

To complement the quartet, Malami, who has since transformed to the status of being the federal government, unleashed operatives of the Economic and Financial Crimes Commission (EFCC) on Dr Joy Nunieh, Pondei’s predecessor as MD for alleged corruption. The timely and proactive step by the Rivers State Governor, Nyessom Wike saved the woman from cooling her head in the gulag, even though to this day, we cannot tell the script was not designed to end that way.

It is to our collective shame that nothing came out of IMC probe. Pondei and others accused are walking the streets as free men. Just as tales from the forensic report seem to have dwarfed agitations over the PIA and a new board for the NDDC. Definitely, we should be expecting a twist in the script; an anticlimax. Because, it is the way we rock in Nigeria. It is a convenient story no doubt. Except that it stinks to high heavens!