The Delta State Police Command under the leadership of CP Ari Muhammed Ali has been commended for efforts so far put in place in warding off the evil activities of criminals and criminality in the state.

The League of Professionals for Strategic Advocacy, an advocacy group for good governance, made the commendation when they were received in audience by the Commissioner of Police in his office while on a courtesy visit.

The Convener of the group, Prince Obaro Unuafe said the commendation was necessary as a fillip to encourage the police to do more, nothing that many people tend only to see the bad sides of the police but are unaware of the good things that policemen, who risk their lives to protect society are doing.

“We can see today that Warri and environs are calm and almost crime free; even right now we can see the same element of peace replicated across Delta State.” Prince Obaro said.

Prince Unuafe, who is also the Senior Special Assistant to the Governor of Delta State on Communication and Orientation said the League of Professionals for Strategic Advocacy is particularly enthused by the efforts of CP Ali to sanitise the police system and called attention to moves that underscored this point with the sacking two policemen last week for assaulting a citizen while on illegal duty. For Prince Unuafe, this is novel and deserves commendation. “You took the action because you want to sanitise the police in your Command. We want to thank you. For those who have been castigating the police, it is also important that they also know the good things that the police is doing in  Delta State,” he said.

The Convener of the League of Professionals for Strategic Advocacy told the Commissioner of Police that the group was ready to partner with the Police Command in the mission to ensure a crime free Delta state.

He hinted that especially in this ember months that comes with a rise in the tempo of criminal activities, the group would like to collaborate with the Police Command in the area of advocacy so as to ensure a crime free Delta state.

In his speech, the Chairman of the League of Professionals for Strategic Advocacy, Mr. Pius Mordi praised CP Ali for his efforts so far that has made Delta State relatively crime free and peaceful. “We note that criminals, bandits especially featuring from the neighbouring states never got access into Delta State,” Mr. Mordi said.

He then proposed that the group was giving the State Police Command opportunity to feature on its its radio programme platform on Delta Broadcasting Service, Asaba, with a call on the command to send in a representative on the programme to tell Deltans what the command is doing, and the chance to answer questions on issues brought before it by members of the public since it is a phone in programme. 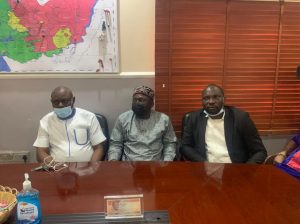 The Commissioner of Police, CP Ali in his response appreciated the League of Professionals for Strategic Advocacy for the visit, pointing out that policing is an issue that cannot be left alone to the police.

CP Ali said: “The Police cannot do it alone; it is a symbiotic thing that works better in partnership. There is nowhere in the world that is crime free, same for the advanced nations.

“In Delta State, cultism, murder and land grabbing are majorly the crimes that are prevalent.  Kidnapping rate is reducing. Crime free society promotes peace which in turn encourages investors to come in. No society develops without investors and without peace,” CP Ali said.

He continued: “In Delta State crime rate to a large extent has dropped relatively. We thank members of the public for collaborating with the police in the state because crime is borderless. Let’s continue to partner together for peace to reign and create the lasting environment for investors to come into the state and invest. The Police alone cannot do it. We need you to partner with us to let the people know what the police is doing.”

CP Ali thanked the League of Professionals for Strategic Advocacy for making its radio phone-in programme in Pidgin English platform available to the police, and pledged to send in his officers to the programme every Wednesday.

He then introduced the new Deputy Commissioner of Police of the Command, DC Johnson Adenola who is in charge of Operations in the state.