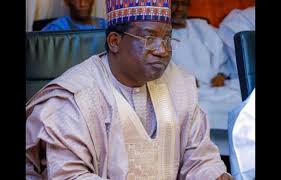 Save Middle Belt Nigeria, SMBN has described the roles of Governor Simon Lalong in the Northern Governors Forum, NGF, as embarrassing and antithetical to national stability and progress.

The group in a statement issued by its Plateau State Coordinator, Barrister Dabilong Voeldong on recently lamented the stand of the Northern Governors forum against the zoning of the nation’s highest office to the South in 2023.

“The position of these so-called northern leaders is callous and insensitive. It does not represent the overwhelming wish of the ethnic minorities of the Northern region and the Middle Belt.

“Our people believe in equity and justice which is the only guarantee for peace, tranquillity and nation-building.

“The unwritten agreement to rotate the presidency between the North and the South should and must be adhered to”.

“It is morally reprehensible for any Middle Belt Governor whose people are in an alliance with the South to checkmate the political adventurism of the Hausa-Fulani Oligarchy, the wanton killings by the Fulani herdsmen and the terrorist atrocities of the bandits, to be the spokesman of a feudalistic group of politicians and Emirs”.

The Save Middle Belt Nigeria associates said that it associate fully with the stand of the Southern Governor’s forum and will mobilise our people to support the quest for a president from southern Nigeria in 2023.