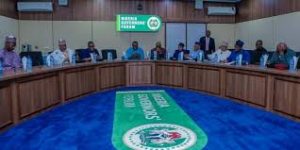 The National Fresh Vision, a non-governmental organization has taken swipe at the Nigeria Governors’ Forum (NGF) and the Minority Caucus of the House of Representatives over their stance against the payment of $418 million, which the court made in its judgment in favour of consultants who facilitated the Paris and London Clubs refund to Nigeria. 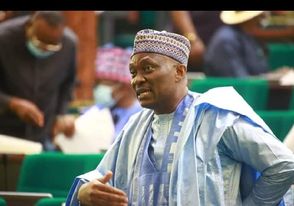 NFV, a group committed to good governance, justice, rule of law and equity, said in a statement signed by its National President, Prince Walters Eziashi and National Secretary, Mr. Fred Akpewe that it was wrong for the NGF to seek to negate the judgment of the court by trying to arm twist President Muhammadu Buhari not to obey the judgment of the court on this issue.

The group also berated the Minority Leader of the House of Representatives, Rt. Hon. Ndudi Elumelu, accusing him of meddlesomeness in dabbling into a matter he knew little or nothing about.

Below is full text of the statement by the National Fresh Vision.

PAYMENT OF $418 JUDGMENT DEBT TO CONSULTANTS AND LAWYERS – WHERE THE NGF, MINORITY CAUCUS OF THE HOUSE OF REPRESENTATIVES ERRED.

The National Fresh Vision, an NGO committed to good governance, justice, rule of law and equity has been studying the issue of payment of $418m as judgment debts to legal consultants which facilitated Paris and London Club’s refund to Nigeria and which has generated more furore than it should.

The Nigerian Governors Forum (NGF) and the Association of Local Government of Nigeria (ALGON) which are at the centre of this imbroglio have immensely benefitted from the services of the consultants and lawyers who are now claiming a cumulative sum of $418m which was not only initially acknowledged by the NGF but was also highly supportive of it ab-initio.

THE HUE AND CRY OVER THE JUDGMENT DEBTS AND MATTERS ARISING.

It is in this light that we must situate the present hue and cry over the decision of the Federal Government to divest self and unbundle some of the hanging judgment debts as a government that respects the judgment of the law courts and the rule of law. The payments are also part of the broad policy initiatives of the Federal Government for which the Attorney-General and Minister of Justice seems to be irrevocably committed. It is this position of law that the NGF is desirous of suppressing to give vent to skepticism and misinformation.

Contrary to the position of the NGF, the $418m judgment debt in favour of some eligible consultants and lawyers is not suspicious or nebulous. The processes leading to the award of the judgment debt to the consultants and lawyers followed every available due process just as the spirit of the later day objection of the NGF and the Minority Caucus of the House of Representatives amount to a direct blame on Mr. President for obeying court orders. The NGF has even gone as far as urging the CBN and the Federal Government not to honour the payment of the said $418m judgment debt in favour of Prince Ned Nwoko/Linas International Ltd. and others in spite of the issuance of Promissory note to the benefactors by the Minister of Finance on the instructions of Mr. President. The NGF has also cautioned banks not to give credit to the legal consultants based on the Promissory notes as if on a war of vendetta.

From available records, this is not the first time the NGF would want to eye the monies legally committed to consultancy and legal services provided on the Paris Club refunds. As far back as 2016, the NGF had used its influence to corner the 1st and 2nd installments of the 5% provided for legal fees and consultancy, by arm twisting the erstwhile Minister of Finance, thus depriving the consultants and lawyers of a whopping sum of US $86,548,526.65 and US $19,439,225,871.11 respectively. This was done without consideration that Prince Ned Nwoko/Linas International Ltd had used his own funds in the tedious process of the debt refund negotiations where he engaged other professionals at his own cost.

Had the debt refund negotiations failed Prince Ned Nwoko/Linas International Ltd would have borne huge personal losses. The NGF also later went ahead to short change LINAS INTERNATIONAL LTD of the sum of $100m out of the $350m approved by Mr. President for the consultancy services rendered to Local Governments. This is where the NGF has erred. Let us imagine that if the legal consultants had received commensurate cash payment from their services when the states and local governments were receiving theirs, it would now have been unnecessary for the legal consultants to enforce their rights. By being issued Promissory notes in 2021 rather than cash to the legal consultants, their entitlement has become significantly devalued.

Moreover, the court judgment under question has been executed and no court of law may want to grant a stay of execution on it. There is, therefore, no subsisting court order ordering the Federal Ministry of Finance to stay execution of the judgment being enforced, as the NGF wants us to believe.

The NGF cannot choose which law to obey and which not to obey. In this case the NGF is trying to manipulate the law to suit its whims and to whip up public sentiment against the consultants and lawyers. The NGF cannot approbate and reprobate at the same time in this matter. The type of summersault being employed by the NGF as represented by their lawyer, Mr. Falana, (SAN) endangers the legal framework and Constitution of this country. Mr. Falana cannot in 2019 urge the Ministry of Finance to pay the consultants their dues before the balance is paid to the Local Governments only for him to do a legal summersault in 2021 to seek leave to appeal the same judgment on the suit his client, ALGON sought to enforce. The fact remains that the NGF is yet to fathom the legal boundaries concerning Local Government funds as the “funds involved in this instance, were judgment sums recovered from the Federal Government by LINAS INTERNATIONAL LTD in favour of 774 Local Government councils in Nigeria”.

Besides, in a letter dated 5th July, 2017, the NGF had informed the Honourable Minister of Finance with the title “Re-Letter of no objective for payment of legal/consultancy fees to LINAS INTERNATIONAL LIMITED regarding over deductions on Paris and London Clubs loan on the accounts of States and Local Governments (1995-2002)”.

Whereas the NGF had expressly and unequivocally stated in the letter that “we do not object to the direct payment of the balance of consultancy fees due to Local Government, to Messrs LINAS International Ltd.” The present 2021 position of the NGF is an exact opposite of their letter in 2017. This duplicity is very shocking, even repugnant to natural justice, equity and the rule of law especially for the NGF to do a thorough volt face at this stage. It is in this light that the team of Senior Lawyers led by Joe Gadzama, SAN in objecting to the NGF’s current posturing described their actions as “dishonest, deceitful and malicious”.

The National Fresh Vision is aware that Mr. President had directed the Honourable Minister of Finance and the Honourable Attorney-General and Minister of Justice to compute all judgment debts for payment in order to stimulate the local economy as the monies will be utilized in Nigeria.

Curiously, the NGF and the Minority Caucus of the House of Representatives are only concerned about the $418 million judgment debts for consultants and lawyers who negotiated the Paris Club refunds. They believe that the US $1billion debts are problems only for the Federal Government. National Fresh Vision has no reason to believe that the NGF, if entrusted with monies emanating from government debts, will utilize the money in Nigeria to stimulate the economy. The possibility of these monies finding its way offshore is very high judging from past history. It is therefore in the interest of Nigeria and its economy for all judgment debts to be paid and utilized in Nigeria for the betterment of Nigerians.

MEDDLESOMENESS FROM THE MINORITY CAUCUS OF HOUSE OF REPRESENTATIVES.

It is also highly regrettable that the House of Representatives Minority Caucus led by Ndudi Elumelu would, midway dabble into the complex variables and dynamics of the Paris Club refunds they know little about, make un-salutary comments about the judgment debt and even toe the line of the NGF that the judgment debt be put on hold.

The National Fresh Vision expects, however, that in the days ahead the NGF will come to terms with reality by supporting Mr. President’s resolve to respect Nigerian laws and judgments emanating from the courts. To attempt to arm-twist Mr. President to disobey the laws and law court judgments is an invitation to anarchy. We also urge the NGF to respect precedents rather than push the judiciary to run amok. This is the only way the NGF can correct the impression now gaining currency that they are prepared to violate the laws of the country provided they get more money for their forum. 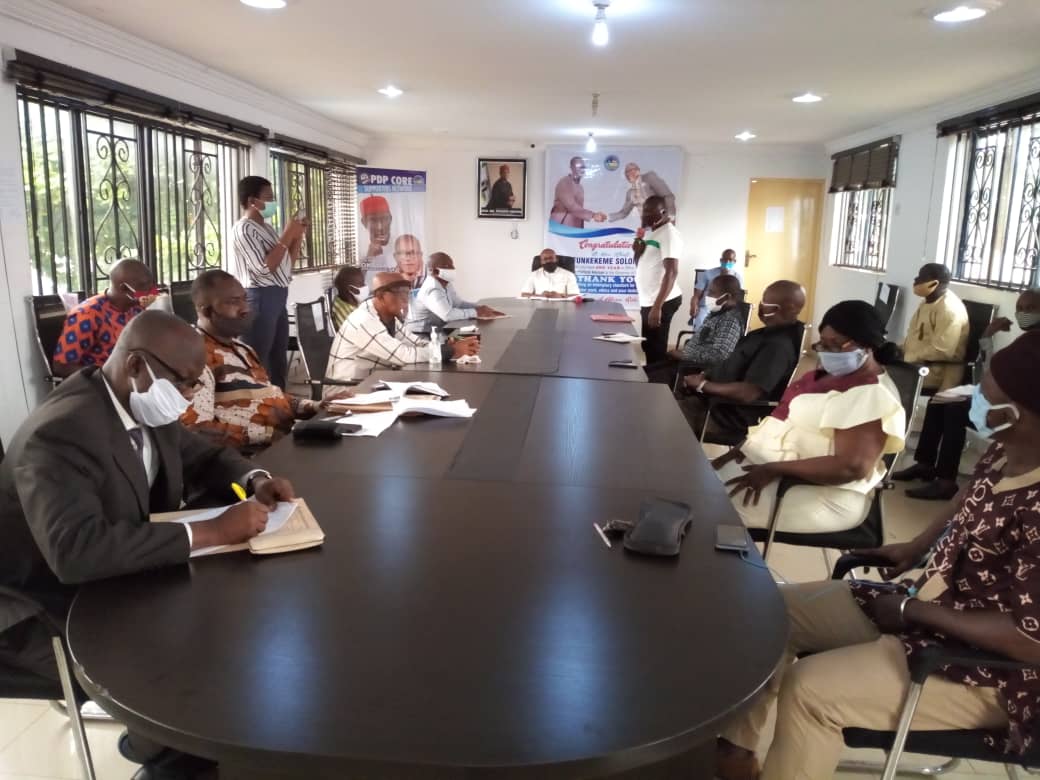 PERSPECTIVE – Edo: Dilemma of a godfather