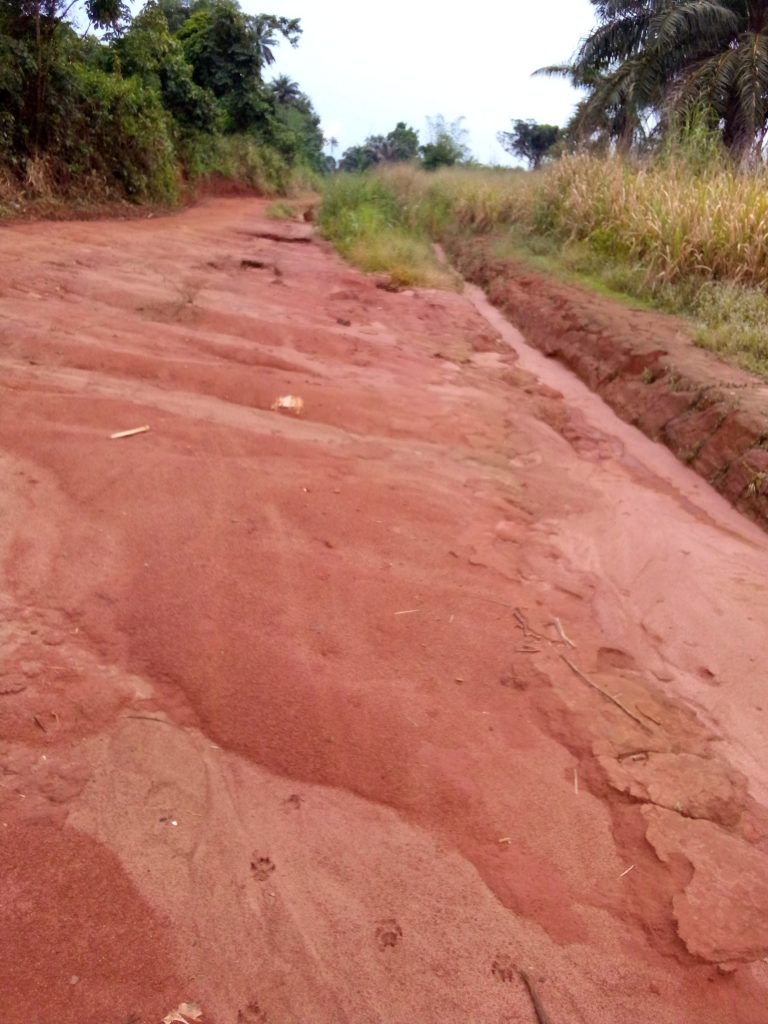 Adonte: A community in pain for lack of roads, cut off; pleads for Okowa’s intervention

By Chukwudi Abiandu
Adonte, an agrarian community in Aniocha South Local Government of Delta State has lost its liveliness as the now sleepy town is cut off totally because of lack of access roads.
What used to be the main access road to the town, the Adonte-Ogwashi-Uku Road has failed and totally collapsed, a phenomenon that the people have had to contend with in a manner reminiscent of late Afrobreat king, Fela Anikulapo-Kuti’s lyrical hit, in the album, “Suffering and smiling.”
Yet, the people of this community are not smiling, they are not cheery, they are pining because of the misery that the road collapse and the absence of an alternative has inflicted on the people, particularly the negative commercial and economic life that came in the wake.
Besides, the situation has affected the educational life of the children of the community; teachers, members of the National Youth Service Corps (NYSC) posted to the state find the condition of difficult circumstances unbearable and so work their way out of the town.
The President General of Adonte Development Union, Asaba chapter, Mr. Austin Ebodili told banneronlinenews.ctowns that are shorter om: “The people of Adonte community are suffering. We desperately need the repair of the main Ogwashi-Uku – Adonte Road. When repaired, the road will connect Abunor-Nsukwa-Umute-Ukwu-oba. It will also open access into the abandoned road that links Egbudu-Aka and Ekwukwu-Agbor. These roads link to Ogwashi-Uku the Aniocha South Local Government headquarters. Doing the road will provide the people with cheaper transportation access, especially for the farming population to evacuate their produce.
Listing the challenges faced by the people for lack of motorable road, Ebodili said: “We are forced to pay N1,000 as fare from Ogwashi-Uku to Adonte, a 10 km road. This is what a commuter pays from Asaba from Asaba to Benin. This is the ordeal we are faced with because of the bad state of the road to Adonte.
“Because of the terrible nature of the road, teachers work their transfers out of the schools. The town’s union at a point had to employ casual teachers paid by the community. Also, youth corps members don’t stay because after some time to go and get letters of redeployment. This makes our primary and secondary are perennially short of teachers as a result.
“Our great farmers face economic problems because they are forced to sell at very cheap prices to middlemen who exploit the bad road terrain. Head or tail the community is losing.”
A visit by banneronlinenews.com revealed that the town originally called “the hope of hospitality is now a shadow of itself. The Ogwashi-Uku – Adonte, a trunk ‘B’ road is totally closed, devastated by erosion, closed and overtaken by luxuriant weeds and impassable. The once busy road is now only visible as less than a bush path.
Banneronlinenews.com learnt that when the road used to be good, it took just 15 minutes drive to Ogwashi-Uku.
It was also noticed that portions of the Aniga Primary School have the roofs in terrible condition, begging for repairs. Same was also noticed at Adonte Mixed Secondary School with portions of the roof in shambles and the premises heavily overtaken by weed.

When contacted, the members representing Aniocha North in the Delta State House of Assembly, Hon. Austin Chikezie said that the state government was looking in the direction of Abunor-Adonte and not through Ogwashi-Uku; “its more feasible because of financial constraint,” he said.
Answering a question, Chikezie said: “Immediately I came to the House, I did memos telling the government about this road and the people are aware. I am only a lawmaker, I am not the executive.”
He announced that Adonte benefitted from the only two constituency projects given to him. Chikezie said: “Adonte benefited from one of the two things, the school projects as my constituency projects of six classroom projects.”
When contacted in his office, the Commissioner for Works, Mr. Noel Omodon, with whom were the Commissioner in charge of rural projects and the director, rural projects told banneronlinernews.com that there’s no representation made for the repair of Adonte-Ogwashi-Uku Road as no one has called government’s attention to it.
Mr. Omodon said: “What you are telling us is fairly news. We don’t have anything for Adonte. There are about 560 projects and the Ministry of Works has no project yet in Adonte.”
Meanwhile, the overall President General of the town’s union in Abuja, Mr. Joseph Ifeanyi Okonma said that the people yearn for urgent access road to the community either from Ogwashi-Uku, from the Kwale Express way via Abunor or Ekwukwu-Agbor.

Pleading with Governor Ifeanyi Okowa to come to their aid, Mr. Okonma said: “We are on our knees; Adonte is still part of Delta state, the community has been using communal efforts to grade the road but now we need government’s intervention.”