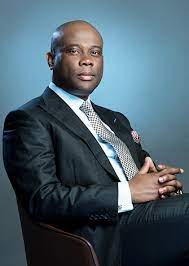 It has become necessary to congratulate Mr Herbert Wigwe on the prestigious award he received this week from the Chief Justice of Nigeria for his outstanding contributions to Corporate Governance and Rule of Law in Nigeria’s banking industry.

Wigwe is the Group Managing Director of Access Bank and Chairman, Body of Bank CEOs. He was presented the Juris Law Award by Chief Justice of Nigeria, Ibrahim Tanko Muhammad at the 2021 Judges Workshop on Banks and Other Financial Institutions Act (BOFIA) 2020 which held on Tuesday, 12 October 2021 in Abuja.

The CBN Governor, Mr Godwin Emefiele also received a similar recognition at the ceremony. The Juris Law Award is presented in honour of leaders who are taking significant steps towards promoting economic growth in Nigeria through deepening institutions, corporate governance and Rule of Law.

In a brief statement, Wigwe said that he was honoured to receive the award noting that “through innovative banking initiatives and our underlying sustainability drive, Access Bank will continue to create shared value for all our stakeholders, striking a balance between competitive advantage and corporate social responsibility.”

Wigwe and Emefiele have partnered in the creation of several positive socio-economic initiatives such as the Creative Industries and Financing Initiative; a loan scheme developed to provide access to long-term and low-interest financing for entrepreneurs in Nigeria.

In addition, Wigwe, Emefiele and Aliko Dangote were key parties in the formation of the Coalition Against COVID-19 (CACOVID) – a vehicle created to spearhead corporate Nigeria’s support for the federal government’s fight against the deadly virus. The successful coalition funded the establishment of response centres, acquisition of medical equipment, supplies and food palliatives for vulnerable Nigerians.

The 2021 Judges Workshop on Banks and Other Financial Institutions Act (BOFIA) 2020 focused on reforms and the statutory requirements imposed by CBN on all banks and other financial institutions in Nigeria to adopt policies on anti-money laundering and combating the financing of terrorism and cyber security in Nigeria.

Among dignitaries who attended the workshop were the Attorney General of the Federation and Minister of Justice Abubakar Malami (SAN); the Appeal Court President, Justice Monica Dongban-Mensen; the Chief Judge of the Federal High Court, Justice John Tsoho; the Former Chief Justice of Nigeria and former Chairman, Board of Governors, National Judicial Institute, Hon. Justice Mahmud Mohammed and other high ranking judicial officers and the legal community.

The recognition to Mr Wigwe is one of the most befitting of such honours given to our business men and women in recent history. Herbert Wigwe is a well accomplished and respected leader in the nation’s banking industry.

His inspiring story and the manner with which he conducts his official and personal life are quite exemplary to both colleagues and younger Nigerians. Those of us who know him a bit closely are enthralled by his personal charm, wits and sense of humour. We are eagerly expecting to read his memoir when he retires.

Wigwe started his career at GT Bank over 30 years ago and rose rapidly to the position of Executive Director. It was at GT that he met and struck friendship with Aigboje Aig-Imoukhude, the immediate past CEO of Access Bank, who had since become a renowned African investor and philanthropist. The two men had over time grown their friendship into an enduring business partnership which started in March 2002 when they acquired Access Bank, then a very small and tottering lender.

While Aig-Imoukhuede ran the bank from March 2002 to December 2013 (with Wigwe as his deputy), Wigwe himself assumed full leadership on January 1, 2014. Next March will mark the 20th anniversary of the investment. Within the period, Access has grown to become one of the five top lenders in the country.

The industry, and indeed, the nation are waiting to toast to the phenomenal success they had made of this venture.  In the eight years Wigwe has been in the saddle as the CEO, Access Bank has acquired Diamond Bank, grown its subsidiaries to and in many African countries and established its presence in China and some European capitals.

The bank’s profitability and other performance indicators have been quite remarkable. I recall that The Banker magazine, a publication of Financial Times of London, has named Access Bank ‘’Bank of the Year – Nigeria 2016’’.

The award ‘’celebrates Nigeria’s most inventive bank taking into consideration its comprehensive earnings data, asset and tier 1 capital growth and returns on equity’, according to a statement from the magazine.

I am also pleased that as the bank is growing, it is also paying adequate attention to its corporate social responsibility. I wrote extensively on this in my article published last May. It is important for big businesses to identify with the challenges and aspirations of its host community. Well done Herbert and congratulations once again to you and your team.