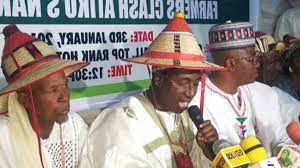 Imagine the government lending its backing to a planned court process by cattle herders, challenging the anti-open grazing laws enacted by some of the 36 states of the federation! The same government, which’s implementing a National Livestock Transformation Programme that adopts ranching, is pursing an outdated and out-modelled open grazing practice that’s spread blood, sorrow and tears across the Nigerian landscape!

The herders specifically plans to query the anti-open grazing laws passed by state governments in Southern Nigeria – enactments premised on a resolution of the Southern Governors’ Forum (SGF), to curb the excesses associated with open grazing.

Attorney General and Minister of Justice, Abukakar Malami (SAN), who lately sparked national outrage over hints to proclaim a state of emergency in Anambra State, revealed the government intention.

But human rights lawyer, Femi Falana (SAN), has described the government moves to back the herders’ dispute with the anti-open grazing laws as “a constitutional aberration and a political suicide.”

Falana says: “Specifically, it is a gross violation of Section 17 of the Constitution, which provides that the Nigerian people are entitled to equal rights and opportunities before the law.

“And Section 42 thereof, which has prohibited the Federal Government from conferring advantage on any group of citizens. Accordingly, the resources of the entire Nigerian people cannot be dissipated on defending herders against state governments.”

Falana predicts that in supporting the herders in the case, the government “will certainly run into serious contradictions having made available the sum of N6.2 billion to Katsina for ranching.”

“The Federal Government will not be permitted to turn round to embrace open grazing. The court will not allow the government to approbate and reprobate at the same time,” Falana adds.

The government doesn’t seem to care about fanning “constitutional  aberration” and “serious contradictions” as the herders’ legal recourse is in tandem with its resolve to implement several (even speculated) instruments that favour pastoralists. They include: “Creation of Cattle Colonies”, “Rural Grazing Area (RUGA) Settlements”, “National Livestock Transformation Programme”, “Re-opening of Grazing Routes”, “New/Revival of Grazing Reserves” and “National Integrated Farm Estates”. There’s a Grazing Reserves Commission Bill before the National Assembly.

These policies face stiff opposition in many states, especially of the Middle Belt and Southern Nigeria that contend with herders-farmers’ clashes that’ve recorded deaths, destruction of farmlands and occupation of indigenous communities by armed herders.

Yet, Miyetti Allah Kauta Hore (Miyetti Allah), and its offshoot, Miyetti Allah Cattle Breeders Association of Nigeria (MACBAN), has opposed, to a state of armed resistance by herdsmen, state governments’ resort to promulgating anti-open grazing laws. The other day, MACBAN was virtually on its knees, pleading with President Muhammadu Buhari and the National Assembly (NASS) to stop state governments from enacting anti-open grazing laws.

Has government’s backing of the herders’ court action to do with MACBAN’s appeal to Buhari and the NASS, to protect their minority interest against the collective interest of the majority? MACBAN’s prayer follows Southern governors’ unanimous decision to pass laws, by September 2021, against open grazing in the South-East, South-South and South-West zones of Nigeria.

Ban on open grazing was first legalised in Benue (Middle Belt) and Taraba State (North-East), to check the movement of cattle – source of herders-farmers’ clashes that’ve spread to Southern Nigeria. So, MACBAN’s application stems from Miyetti Allah’s unrelenting opposition to the Benue anti-open grazing law, established to arrest the wanton killings of farmers, destruction of farmlands, and occupation of their communities by AK-47-wielding herdsmen.

Herdsmen’s deliberate grazing on farmlands and pacification of indigenous communities have telling consequences: Farmers have abandoned cultivation in many states in the North and South for fear of being raped, killed or kidnapped for millions of ransom.

Sadly, the raping, killing and kidnapping of farmers and indigenous people, and destruction of farmlands and seizure of communities by herdsmen are never a source of worry to, and condemnation by Miyetti Allah and its lightning rod, the MACBAN.

On the basis of open grazing, and the laws prohibiting the pastoral practice, Miyetti Allah’s leadership has repeatedly threatened Benue Governor Samuel Ortom, for daring to oust the tradition. Actually, Miyetti Allah has publicly encouraged, and affirmed its members’ destruction of farmlands and killings of farmers and community people in the Middle Belt and elsewhere.

The organisation accusingly hailed armed herdsmen’s failed attack on Governor Ortom in early 2021, during a visit to his farm, with the attackers promising he won’t escape the next time.

In its plea to Buhari and the NASS, MACBAN, on behalf of Miyetti Allah, at a press briefing in Abuja, deployed intemperate language in denigrating state governors pushing for anti-open grazing laws.

“The anti-grazing (sic) laws and policies are nothing but populist and corruption-driven agenda designed to destroy pastoralists’ means of livelihood,” MACBAN told newsmen.

“These dangerous and satanic laws must be nib (sic) in the bud by the National Assembly to safeguard the Constitution as it (is) a potentially greater danger to the corporate existence of the country.

“These oppressive laws and hostile policies being enacted by state governors are fundamentally going against the Fulani pastoralist culture, economic interest and constitutional rights.”

Really? How can state governments be playing to the gallery by enacting anti-Fulani pastoralists laws and policies that will save indigenous peoples from the atrocities of herdsmen? Rather than spew diatribe, MACBAN ought to stick to its claim that “the laws do not take into cognisance the sociology, economic production system, climate variations, and other push factors that are inherent in pastoralists’ movements across ecological zones.”

The association could posit that the anti-open grazing laws “will undermine the relative peace and stability currently enjoyed by the local communities and threaten the social order.”

* “The laws will lead to serious humanitarian crisis, as families will be destabilised, markets and economic livelihoods disrupted, and cross border migrations will create further security challenges.”

* “Interstate movement of pastoralists is analogous to interstate commerce,… an exclusive preserve of the legislative powers of the National Assembly under item 62 of the Exclusive Legislative List.”

* “Any action taken by any State Assembly that is in conflict with the above section of the 1999 Constitution is null and void,” even as “a review of the Land Use Act is long overdue, to accommodate the interest of all land resources users, particularly pastoralists.”

Still, it’d be asking for too much to expect MACBAN, standing in for Miyetti Allah, to deploy civil decorum to express concerns over open-grazing laws by state governments, majorly in the South.

MACBAN has assumed Federal Government’s ownership of lands, and craves for their seizure. But it’s realising late that lands belong to the states, and held in trust by governors for their people.

Hence the route to take is its call to amend the Land Use Act, to incorporate lands under the Exclusive Legislative List, as a breach of the Act would be unconstitutional, null, void and of no effect.

Going forward, MACBAN and Miyetti Allah Kauta Hore should shed their fiery rhetorics and opposition to the anti-open grazing laws, and embrace holistically their chosen path of constitutionality.

Besides, it should woo, and not vilify state governments that enact anti-open-grazing laws; and key into pronouncements, policies and programmes of the Federal Government that are undoubtedly favourable to its crusading for Fulani pastoralists.

These strategies aim at resolving open grazing. Any underhand intervention, like MACBAN’s emotive plea to Buhari and the NASS, is a challenge to state governments’ jurisdiction over lands.

As noted by Saleh Alhassan, national secretary of Miyetti Allah Kauta Hore, the resuscitation and passage of the Grazing Reserves Commission Bill, and allied bills in the National Assembly, “would come to the rescue of the pastoralists.” Welcome to reality!