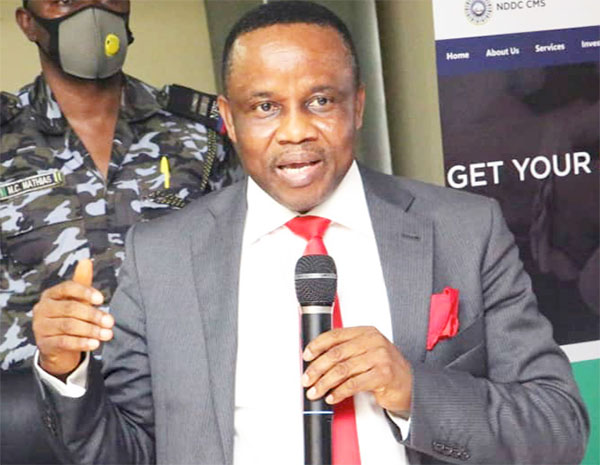 Interim Administrator of the Niger Delta Development Commission (NDDC), Mr. Efiong Akwa has called for a master plan towards building a new face for the Niger Delta Region. 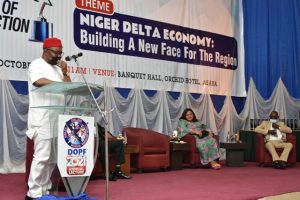 The Interim Administrator spoke while delivering a good will message at the Delta Online Publishers’ Forum’s (DOPF) 2021 Annual Lecture and awards.

Represented by the Commission’s Director of New Media, Mr. Chijioke Amu-Nnadi, he said doing so would help to properly situate the region and get it focused on things to do that will position the region for all round development.

At the event which held on Thursday, said that the commission had done much to reach the people of the region and tranaform the lives of residents in the oli rich region.

He said the Commission’s interventionist agency which was established by former President Olusegun Obasanjo has contributed greatly to the development, stability of the region and transforming the living conditions of people in the region.

He told the people that included the representative of Governor Ifeanyi Okowa , who was Special Guest of honour, Hon. Festus Agas, the guest lecturer, and former governor of Delta State, Dr. Emmanuel Ewetan Uduaghan, the eminent team of analysts, top government officials and journalists who gathered at the Orchid Conference and Banquet hall that as part of strategies to build a new face for the region, he said a lot is being done to reach the people, identify their challenges and sstisfy their needs.

He said NDDC had taken time to ensure that people-oriented projects are constructed in the states that make up the region and make the people feel the impact of the commission.

Akwa also hinted that projects are being commissioned in different parts of the region.

He specifically said that the commission was in the process of commissioning a 1,000- bed hospital at Uyo, the Akwa Ibom state capital and is working on completing electrification projects in five kocal government areas of Ondo state, in the South West Nigeria.

He said a master plan is needed to build a new face for the region which has over the years been accused by residents across the states.

He added that the commission would work with all stakeholders, saying he would build partnership with stakeholders across the region to reach the unreached and make life better for them.

He commended the leadership and members of the Delta Online Publishers Forum (DOPF) for bringing the issue of Niger Delta to the fore and creating opportunity for the interventionist agency to make input.