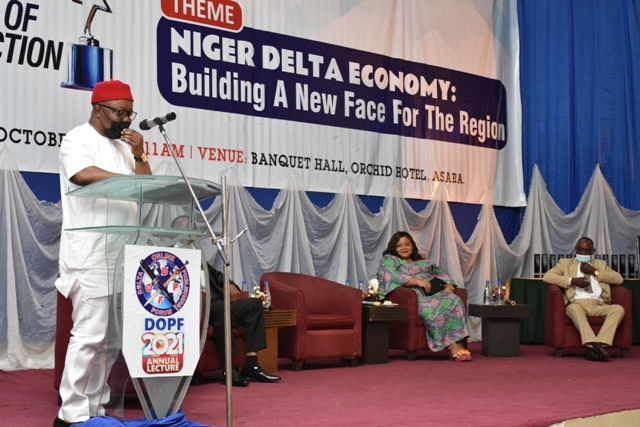 A major way to build a new face for the Niger Delta is to embark on urgent diversification of the region’s economy, former governor of Delta State, Dr. Emmanuel Uduaghan has said.

Dr. Uduaghan canvassed this position on Thursday while delivering a lecture titled: Niger Delta Economy: Building a new face for the region,” organized by the Delta Online Publishers’ Forum (DOPF) to mark its third anniversary.

He said such diversification must be in the area of establishment of industries, human capital and infrastructure development through a concerted effort of stakeholders towards redeeming the lost glory of the region.

Thanking DOPF members for inviting him to give the lecture, which he described as a nice programme, he explained that the theme of the lecture is quite clear as it points out that building a new face for the region implies that there is an old face.

Dr. Uduaghan decried a situation where the Niger Delta which has limited land space is denied the benefit of its water space which the Federal government has declared a no go area by the states. “There cannot be a part of Nigeria that is a no man’s land. The offshore areas belong to the states,” he said.

He said that among the injustices meted on the region is the point in which people from other regions come to enjoy the work facilities provided by the oil resources of the region but who don’t reside in the states of the region thereby not paying the tax due to them to the states. “We have a lot of people in Escravos working in Niger Delta but they are paying taxes to governments outside Niger Delta We are being oppressed year-in-year-out in the region Persons brought from outside Niger Delta for NYSC and are given employment opportunities, especially those from the south west, leaving Niger Deltans out,” the former governor said.

He argued that for the region to wear a new face, concerted effort was needed to diversify the economic fortune of the region to viable areas of human endeavours, using the proceeds from oil to build infrastructures so as to stimulate  boom of other areas of the economy.

He said this was the idea that informed his administration’s three-point agenda of Peace and security, human capital and infrastructure development, pointing out that his administration’s mantra of delta Beyond oil is a programme that will go beyond the life span of any government. “ We are talking now of Niger Delta Beyond oil, we need to bui8ld critical infrastructures that will stimulate economic activities that are not oil related like railroads, among others,” he said, adding that the Niger Delta states must put up policies to stimulate economic development.

He called for sustained engagement in human capital development in the areas of acquisition of knowledge. Uduaghan said: “Knowledge has a lot of benefits and education is very key. A society where the people are not educated, I term them as people who are facing disaster.”

He called for more investment in human capital development programmes/initiatives on prospective youths and women. “Niger Delta is well geographically positioned and endowed with human and natural resources,” Uduaghan said.

In building a new face for Niger Delta Dr. Uduaghan said there is need to stimulate informal enterprises which are the primary sources of livelihood for the people who account for 85 per cent of the population.

“We have been very hostile in the Niger Delta to investors. I hope we can improve on our reception to industries coming to the region. We must be hospitable to industries.

“We must encourage people to have large scale farms in rice, sugar cane, cocoa, roots and tubers, citrus fruits, plantain, rubber, even as the region is blessed with many resources for aquaculture and forestry,” Uduaghan said.

He said cultivation of industries related to these products deserve the active and collaborative support of the state governments, oil and gas companies and other stakeholders in the region.

“We need the air, waters and soil of the Niger Delta; there has to be a lot of environmental remediation in the Niger Delta because we don’t have land.

The former governor however decried the moribund state of the ports in the region, and tasked the Federal government to open up the ports to attract investors into the region, a development he said would bring employment and stem criminality in the nation. He decried a situation where the ports in Niger-Delta have been of sub-optimal performance.

Uduaghan also stressed that the Federal government should carry out environmental remediation of the oil polluted land and rivers of the region in line with relevant laws; noted Niger-Delta region is an agrarian area where its people depend on for source of livelihood.

While paying growing tributes to the contributions of ex-militant, Mr. Government Oweide Ekpomokpolo, aka Tompolo that has brought government attention to the region, he called on all stakeholders in the region to be persuasive in their approach to allow investors into the region.