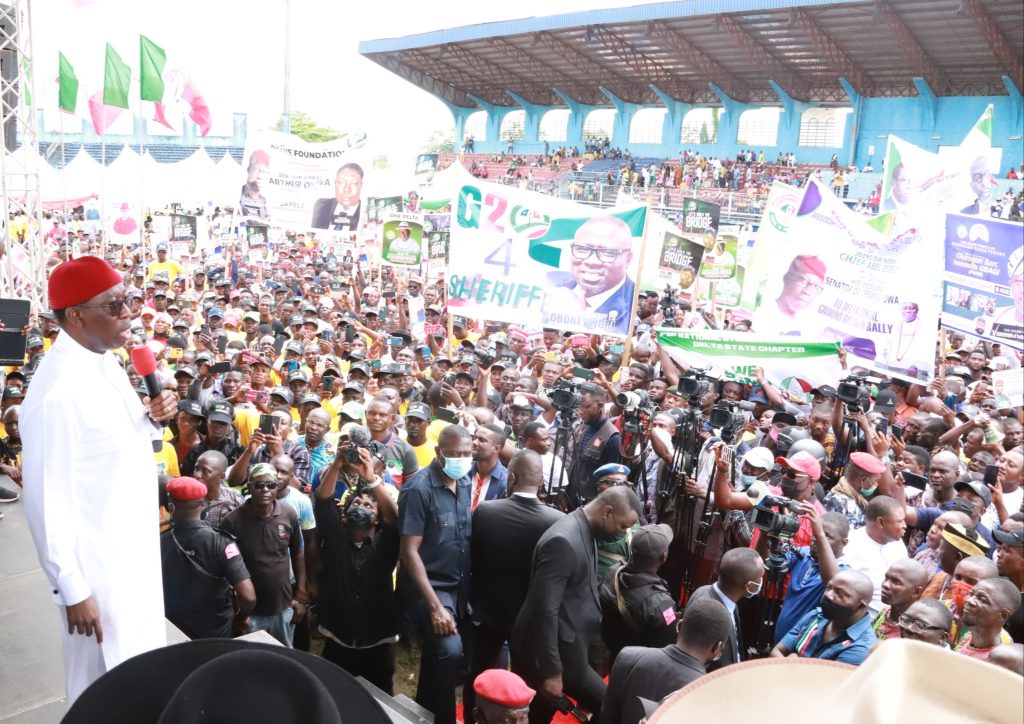 Governor Ifeanyi Okowa of Delta on Saturday, threw jibes at the opposition All Progressives Congress (APC) in the state, describing it as a disorganized party where one man is pursuing others out of the party.

Accordingly, he advised members of Peoples Democratic Party (PDP) in Delta Central Senatorial District to remain united in their quest for the governorship seat in 2023.

Okowa spoke while addressing PDP faithful at a “Mega Rally” organised by leadership of the party in Delta Central to welcome returnees and decampees at Sapele Stadium.

The governor commended the decampees, most of whom were former members of PDP, for joining the PDP, saying that the party was a much organised family in the country and strong enough to win in all the local government areas in Delta Central in 2023.

He described Igbuya as a friend and ally who contributed immensely to his emergence as governor in 2015.

According to Okowa, anybody contesting political office must put his house in order. I have spoken and I hope you have heard me.

“Our goal is to deliver PDP in all local governments in the state.
PDP is a much organised party where we welcome new members unlike APC where one man is pursuing others out of their party.

“We are one united family in PDP and once we take that decision we will all stand by it.

“It’s not about me but about what is good for all Deltans, and at the appropriate time, we will meet and take a decision, which will be for the overall good of all Deltans,” he stated.

Welcoming the decampees, Chairman of PDP in the state, Chief Kingsley Esiso, said that PDP was the only visible and well-organised political party in the state.

“I welcome you all to this great consolidation rally put together by our party in the Delta Central Senatorial District.

“Here in Delta, there is only one political party led by our amiable governor, Senator (Dr.) Ifeanyi Okowa.

“In Delta State, we have some pretenders who call themselves APC. In 2015, they told us that they were coming to fight corruption and security but today we have overblown insecurity with bandits, terrorists, kidnappers ravaging parts of the country.

“I have seen a lot of banners for aspirants but I want to advise that as they go about their campaign they should be very peaceful about it.

Earlier in his welcome address, Chairman of PDP Delta Central, Dr Patrick Fovie, said that the rally was organised to welcome returning party members who went on “political sabbatical”.

He commended Governor Okowa for his leadership sagacity, describing him as an “epitome of probity and accountability” in governance.

They said that the rally was a preparation for 2023, adding that the district was ready to produce the next governor of the state.