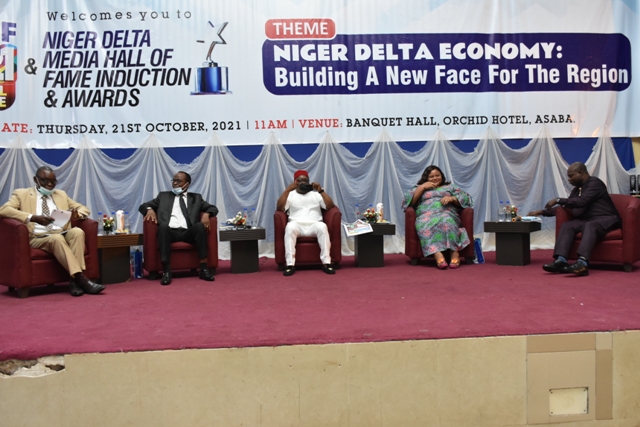 DOPF 2021 Lecture: Stakeholders in accord for a new face for Niger Delta economy

Stakeholders in the Niger Delta Area have decried the lack of attention to the region, being the main stay of the economy of the nation, grieving that a disturbing aspect of neglect is denial of the region of its water space, and free access to the oil business in the country. Accordingly, they advocated for a new form of ways to develop the area.

The stakeholders expressed their views at the Delta Online Publishers Forum (DOPF) 2021 Annual Lecture, with the theme: Niger Delta Economy: Building a New Face for the Region”, on Thursday, October 21, 2021, in Asaba, Delta State.

The event, which was the third in its Annual Lecture Series, had in attendant, the former Governor of Delta State, Dr. Emmanuel Ewetan Uduaghan, who was the guest speaker, the Governor of Delta State, Senator Ifeanyi Okowa, represented his Chief of Staff, Barr. Festus Ovie Agas, the Deputy Senate President, Senator Ovie Omo-Agege, who was represented by one of his aides, Mr. Joseph Adimabau, Miss Ankio Briggs,  Prof. Patrick Muoboghare, Miss Faith Nwadishi, Dr. Ignatius Nwanze Ezoem, and the Interim Administrator of the Niger Delta Development Commission, NDDC, who was represented by the Director of Media, Mr. Chijioke Amu-Nnadi.

In his submission, the guest lecturer, Dr. Emmanuel Uduaghan, criticised the idea of the continuous tagging of the Niger Delta Region as a “Red Zone”, by the international community, saying that activities in the area is mainly fueled by the actions of the companies, as not considering the plights and needs of the people, especially in the diversification of the economy of the area.

The former governor stated that the region can be moved from its present underdeveloped phase to a better one, where human capital development is highly carried along with other indices of human development.

He expressed strong disapproval with the act of the federal law of the, which denies the states of the region the water space, which is to be harnessed by the various states for their economic growth as it’s done with those with massive land pace in the country.

On his part, the Governor of Delta State, Senator Dr. Ifeanyi Okowa, who was the special Guest of Honour, called for the continuous development of the youths through skill acquisition, stating that the states in the region have agreed to work more closely to have a homogenous drive to improve the lives of the people and grow the economy”.

On his part, the Deputy Senate President, Senator Ovie Omo-Agege, said one of the areas for a new economy to be built in the region, should be to develop sources that represent the diversity of facts of the people they serve, particularly in the form of  multi-ethnic and multi religious character of the region.

“If today, after the struggle that we have put in, if we find ourselves in a position today, where we are sitting down to discuss the way forward and we are talking about the basis of how to get oil investment. How will our people invest when our people are not even participants in the economy that is generated? The people controlling the oil and gas privately are outside the government,” she said;.

She added that the region equally have about 20 billion out of the 66 billion barrels of oil enjoyed by the country from the area.

Nwadishi also disclosed that if in 1956, about 5, 000 barrels of oil was exported and today over 1.2 million barrels of oil per day and that is yet to translate to the economy that the region is looking for, “that is an indictment on all of us”, she reiterated.

He said: “The problem of the Niger Delta is not what is going to be said. What has been said we ought to work with it. The Niger Delta region is a blessed region by God but today, we are still discussing about the Niger Delta. I am worried because the Niger Delta that we are talking about, has all it takes to be the Los Angeles of Nigeria”.

He noted that the Nigerian factor gives emphasis to theory than practical, just as he called on the Niger Delta governors to put on their thinking caps rather than go to Abuja, to beg for what rightfully belongs to the region.

Delta State Commissioner for Higher Education, Prof. Patrick Muoboghare, in his contribution pointed out that it was difficult for government at all levels to employ everybody into the civil service, hence the Dr. Ifeanyi Okowa-led government, has diversified into skills acquisition for youths, which he said has yielded the needed results.

He said it was an act of irresponsibility for anyone to tag Delta State a red zone, “Delta State is about the safest state to live in Nigeria today. Delta is a free zone”, he stated.

Prof. Muoboghare pointed out that the Colonial masters caused the agitations in the Niger Delta region. “They abandoned us, took our wealth away but when our boys started going to school and understanding the intricacies of the Nigerian State that we have been pushed against the wall. These boys are merely trying to resist and the role of leadership is to talk them down asking them not to resist.”

He called on the federal government to do the needful by way of relocating the Nigerian Navy to where it originally ought to be instead of citing it in Kano where there is no water.

“Let the federal government of Nigeria, do the needful. They carried the Nigerian Navy to Kano where there is no water. To start with, remove that Naval school from Kano back to where the Navy should be in the Niger Delta area. There is no technology that drives ship on land”, he said.

On his part, the Interim administrator of the Niger Delta Development Commission (NDDC), Mr. Efiong Akwa who was represented by his Media Director, Mr. Chijioke Amu-Nnadi, said building a new face for the Niger Delta Economy would help to properly situate the region and get it focused on things to do that will position the region for all round development.

The commission said much had done to reach the people and transform the lives of residents in the oil rich region.

Akwa said the commission was established to develop, stabilise and make life good for the people in the Niger Delta region, as her dream policy after the forensic auditing, so as to speed up development of the region.

He assured stakeholders of the commission’s readiness to collaborate with all players in the region to develop and implement a better economic and social development policy for the area, especially with the conclusion of the forensic audit.

Earlier, in his welcome address, the Chairman of the Forum, Mr Emmanuel Enebeli said the 2021 theme became necessary as the area which produces the wealth of the nation over the years had not shown signs of development, as they had not gotten the true value of the black gold that is in their communities.

He called for a new channel of development plan for the region, that is endowed  with others resources, and a very beautiful waterfront that can be harvested for the good of the people.

He condemned the continuous dependent of the governments of the region on allocation from the federation.