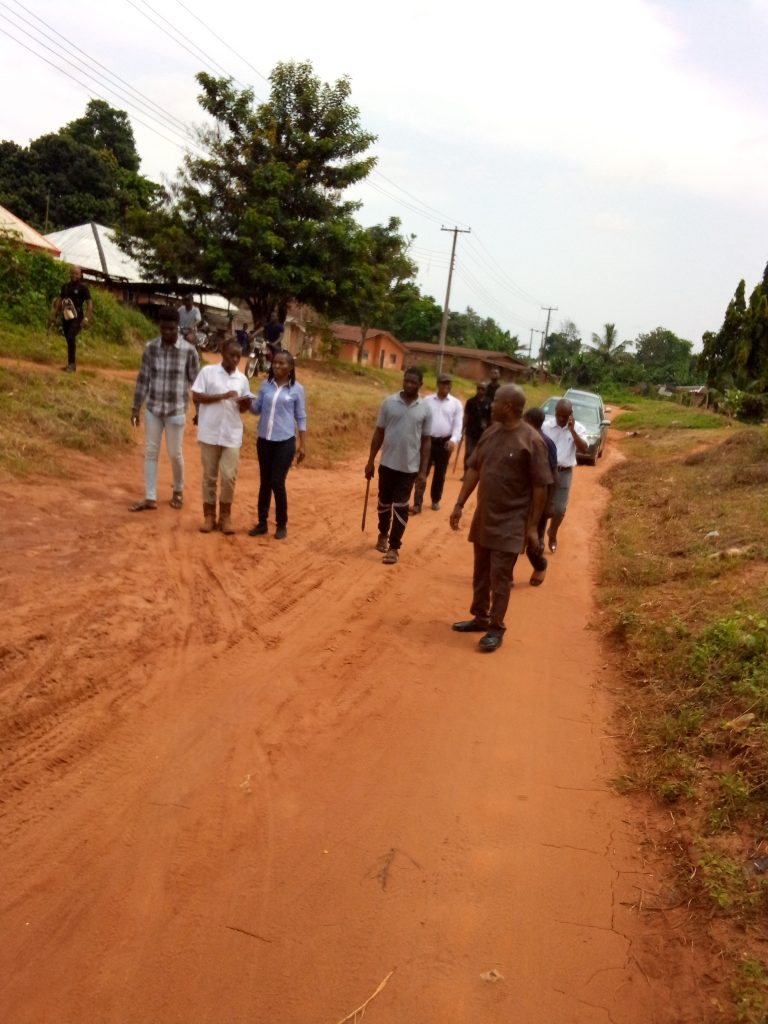 Following banneronlineews.com story there was palpable joy on Monday, October 25, 2021 in Adonte town, Aniocha South Local Government Area when engineers from the Ministry of Works came on a visit apparently sent by the state government.

The joy expressed by the people was in anticipation that an end to their anxiety may be on the way for the embattled people as Delta state Government on Monday, dispatched engineers to take inventory of the unmotorable nature of the road that has kept the people cut off and in pains.

The road which is overgrown with tall, strong weeds, devastated by erosion and closed as a result, making the only means of trading activity in the town, the market to remain fallow, empty and unproductive because traders can no longer access the town for commercial purposes.

However, in response to the story of banneronlinenews.com (see www.banneronlinenews.com/2021/10/adonte-a-community-in-pain-for-lack-of-roads-cut-off-pleads-for-okowas-intervention/) in which the leaders of the town and the people made a passionate appeal to Governor Ifeanyi Okowa to come to their aid and rescue them from the devastating effect of the “no road in Adonte” syndrome that has made living difficult and tough for them, the government dispatched a team of engineers, led by a female official to the town.

The team, which was conducted round the town by the President General of Adonte Development Union, Mr. Joseph Ifeanyi Okonma, took record of the very bad nature of the roads, especially the terribly devastated Ogwashi-Uku- Adonte, bad spots and possible areas that would be needed to channel flood water away from where it currently converges.

Although the engineers declined to speak claiming that as civil servants they are not permitted to, but they were however, prevailed upon to visit the Obi of Adonte, His Royal Majesty, Agbogidi Emmanuel Offor in his palace at the end of their inventory work.

The obi welcomed them to Adonte, and commended the State Government for sending them to see the deplorable state of the road.

Speaking to banneronlinenews.com, Obi Offor said: “The bad state of the road has been our major problem. We are mainly farmers here but we don’t have road. We have tried in politics but supporting and voting in the government, and we are asking that they should not forget us, and our desire to have a good road in Adonte.

“Our joy is asking for this road to be approved and repaired. They should let the things that get to others also get to us too. The community is appealing to Governor Okowa to help us. All of us are happy that Okowa is governor, and let him help us because we are also part of Delta State,” Obi Offor said.

The President General of Adonte Development Union, Mr. Okonma said the coming of the officials of the Ministry of Works was response “Our call on the state government to come and wipe our tears.”

Pointing out that the Monday visit of the government officials came as a surprise to the community, he “because we have been writing for years, but no response.

But we are surprised this time around to see government sending its officials.”

Since he conducted the officials round the community, he was asked to mention the points he took the officials to, Okonma said: “From the very point of the beginning of Abunor end at the Kwale Expressway down to Adonte Town they were looking  at the vantage points to divert flood water, which been a major hindrance.

“The coming of the state government’s officials from the Ministry of Works indicates a good sign of possible construction.

“We thank the state government for this bold step in responding to our cry, and we encourage them that and that we are calling Okowa by the name of the ‘Road Master’ that he is.”