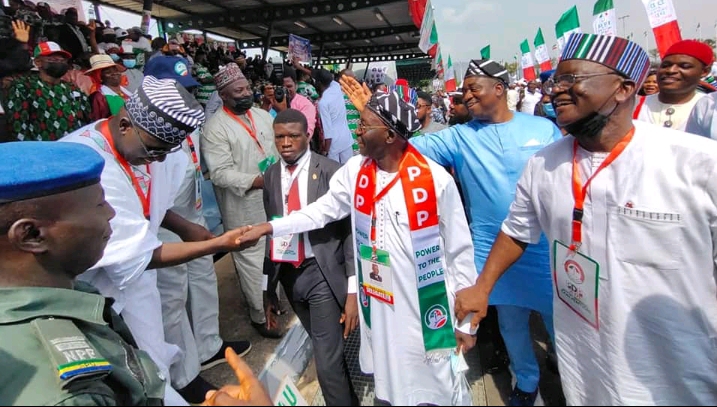 A new National Executive Council (NEC) has been elected by the Peoples Democratic Party (PDP), with Sen. Iyorchia Ayu emerging as the new National Chairman and Taofeek Arapaja the National Deputy Chairman (South).

The News Agency of Nigeria (NAN) reports that Ayu, who was the consensus candidate at the party’s national convention in Abuja, got 3,426 affirmative votes out of 3,511 accredited voters.

However, Arapaja secured a total of 2,004 votes to defeat his only rival, Prince Olagunsoye Oyinlola, former Governor of Osun, who polled 705 votes, while invalid votes were165.

NAN reports that the position of National Youth Leader was won by Mohammed Suleiman with 3,072 votes, while his co-contestant, Usman Elkudan, had 219 votes.

Efforts to achieve consensus candidates for all 21 elective national offices of the party suffered a setback as agreement could not be reached for three offices.

NAN reports that the new members of the National Working Committee are expected to assume offices after the tenure of the incumbent members expires on Dec. 9.

In his appreciation remarks, Ayu said that the PDP was back to take over Nigeria and develop it.

The national chairman-elect said the PDP did it before and would do it again.

“I want to sincerely appreciate the PDP family. Today is simply a “thank you”address. When we started this party 23 years ago, we never in any way imagined that the journey would get us to this stage.

“A stage where we ruled for 16 years, we went into rough times, but for anybody who bothers to see, PDP is back.

“Many people imagine that this convention will lead to the breakup of PDP. Those people who are dreaming like that, their dreams were misplaced.

“Those who have lost hope should know that Nigeria is not a divided country. A small group of people decided to divide Nigeria.

“PDP will come back to unite our people, put them together, north and south, east and west.

“We will move ahead to develop this country. We did it before. We are going to do it again. I want to thank the governors,” Ayu said. (NAN)  (www.nannews.ng)