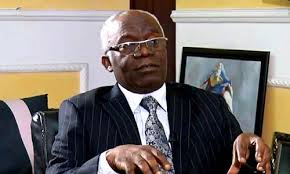 Security operatives had, on Friday night,  invaded the house of the supreme court justice based on information that “illegal activities” were going on there.

The warrant presented to search the property was issued by Emmanuel Iyanna, a chief magistrate at Wuse zone 6 magistrate court, in favour of one Lawrence Ajodo, identified as a chief superintendent of police and a member of the investigation team under the asset tax recovery panel of the ministry of justice.

Abubakar Malami, attorney-general of the federation (AGF), had denied involvement in the raid, while calling for an investigation of the incident.

The magistrate has since revoked the warrant.

In a statement on Monday, Falana stated that judges will continue to witness such “attacks” if the judicial official who issued the warrant is not disciplined.

“On February 21, 2020, a gang of armed thugs invaded the residence of Justice Mary Peter-Odili at Abuja and subjected her to unwarranted intimidation. The protesters claimed that they were dissatisfied with her judgment in an appeal that was decided by a full panel of 7 Justices of the Supreme Court of Nigeria,” Falana said.

“Since the armed thugs were treated like sacred cows last year, the Honourable Justice Mary Peter-Odili was subjected to further intimidation in the same house by a combined team of police and military personnel last Friday while executing a search warrant in respect of another property.

“The Magistrate who issued the warrant of arrest has turned round to revoke it on the ground that he was misled by the office of the Attorney-General of the Federation.  Although the Economic and Financial Crimes Commission and the State Security Service have denied involvement in the intimidation of the Senior Judge the Nigerian Army and the Nigeria Police Force have not denied the presence of their personnel in the house.

“Without prejudice to the official investigation, the Nigerian Bar Association should ensure that the members of the legal profession who took part in the execution of the illegal search warrant are reported to the Legal Practitioners Disciplinary Committee. Otherwise,  such attacks will continue to be unleashed on Judges, from to time, by the sworn enemies of the Rule of Law in the corridors of power.”

The NBA has described the invasion of Odili’s home as an “orchestrated affront” on the judiciary.