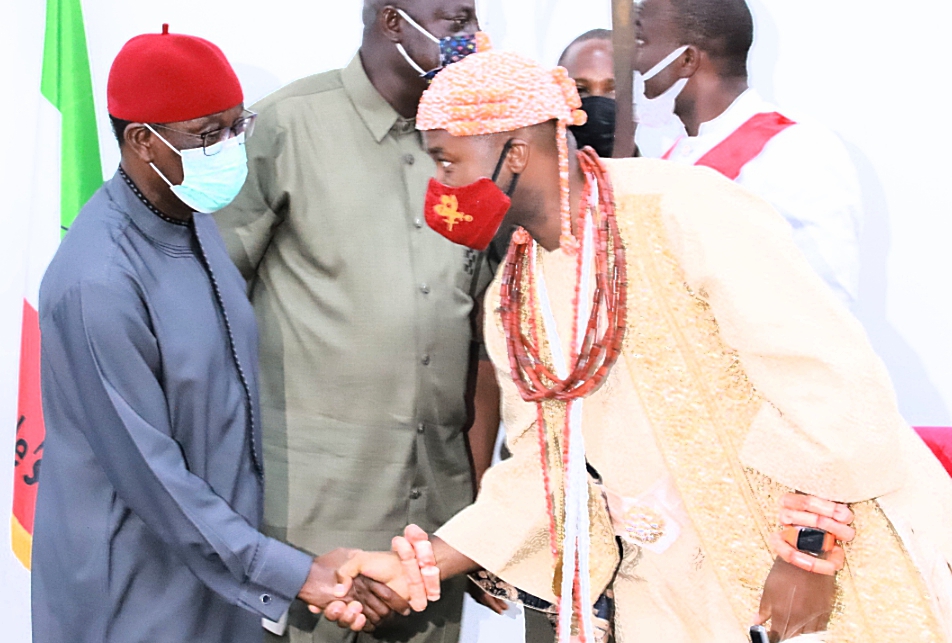 Okowa lauds Olu of Warri for commitment to peaceful co-existence

Delta Governor, Sen. (Dr) Ifeanyi Okowa, on Thursday commended the Olu of Warri, Ogiame Atuwatse III, for his commitment to peace and development in the kingdom and their neighbours.

Okowa gave the commendation when he received the monarch who visited him at Government House, Asaba.

He congratulated him on his ascension to the throne of his forebears, and expressed delight on the visit to him by the revered king.

“I am glad that you visited today and as a government, I want to once again congratulate your Majesty on the ascension to the throne.

“I must thank Your Majesty for the coronation thanksgiving service in recognition of the supremacy of God over mortals.

“As we welcome you and your chiefs I look forward to a perfect working relationship with your palace and the kingdom.

“I pray that God gives you the power and wisdom to continue to work for the peace and unity of our country,’’ the governor said and commended the Olu for his promise to work with their neighbours to ensure that Delta was peaceful.

According to him, where there is peace, there is development.

Okowa remarked that only God made kings, and urged the people to accept and respect the monarch for the institution he represented.

“God makes kings and we must all accept the king that has been installed by God, and we must respect the king and the institution that he represents.

“Let all the chiefs and people of Itsekiri kingdom work with His Majesty to ensure that peace prevailed in Itsekiri nation, Delta and Nigeria.

“As our nation continues to grapple with security challenges, all Nigerians need to be on bended knees to pray for the peace and development of this country.

“When our religious and traditional rulers are praying for the country and its people, God hears and answers their prayers because they are representatives of the people.

“It is my prayer that under your reign, the Itsekiri nation will have peace and development so that your people will have cause to glorify the name of our God,” he said.

Earlier, Atuwatse III had told the governor that his visit was his first official visit outside his Kingdom since his coronation, adding that his delegation was in Asaba on a thank-you-visit to the Governor for his support during his coronation.

He pledged his commitment to peace and shared prosperity between the Ijaws and Urhobos and other ethnic groups in the state.

“Following my coronation on August 21, this year, we have come to Government House today to express the depth of our gratitude for your demonstrated support and respect for the sanctity of our traditional institution, and the entire Itsekiri nation is saying `thank you’.

“It is noteworthy that our visit to you is our first official visit outside the Warri Kingdom, and this confirms the importance our throne and people attach both to your person and your office.

“On our part, we commit to unwavering support for your visionary leadership and your government’s dedicated effort towards repositioning Delta for sustained growth and development.

“As we strive to drive the course of peace and prosperity in Itsekiri land, we are conscious of the greater goal of engendering peaceful co-existence and shared prosperity with our Ijaw and Urhobo neighbours.

“Our special focus is to leverage on the huge potentials which our youths represent and it is our hope that we can engage in a productive partnership with the state government in this endeavour,” the Olu stated.