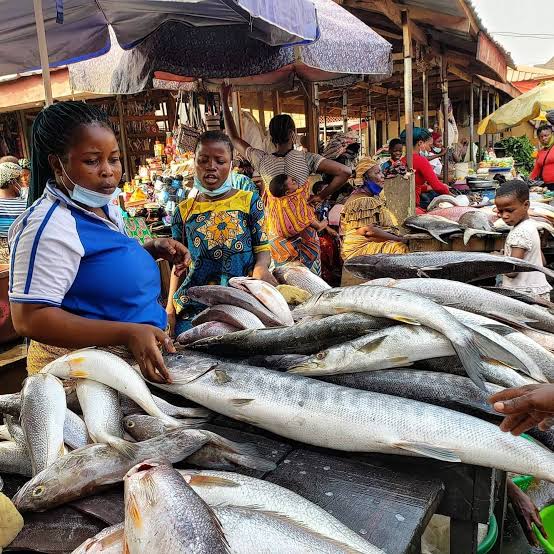 Some of the traders who spoke with the News Agency of Nigeria (NAN) said prices of the few fishes they got were high.

Mrs Fausat Ojikutu, whose father and husband are fishermen said the business used to be lucrative but not any longer.

She blamed the situation on challenges faced by fishermen in catching fishes.

Ojikutu listed the challenges fishermen faced to include poor fishing equipment, sand dredging and the problem of water hyacinth, which is making fishing difficult.

Mrs Sherifat Adeorike-Shodipo, Iyaloja (Woman Market Leader) of the market said the inadequate supply of fresh fish had forced many traders to switch to frozen fish.

She said also the high cost of fresh fish was blamable on challenges faced by fishermen when they went out fishing.

“In the past, we used to have adequate supply, and there was particular species of fish that was affordable by all and sundry.

“These days, because of the challenges fishermen face in fishing, we don’t have enough to buy, and the few we get, we buy at high prices,’’ she said.

The market leader said an average size of Tilapia or Nile fish, which used to be sold for less than N1, 000, now sold for between N1, 000 and N5, 000 owing to the challenges.

Another fresh fish trader, Mrs Tolani Owolabi, told NAN that she had been in the business for more than 20 years and that she had achieved a lot, including building her own house.

The 62-year-old trader, however, said the unavailability of fresh fish from source had adversely affected her business and profits.

“In this business, I have been able to give my children the best of education; build a house and do so many other things.

“Years back, I used to make a lot of profit because the fishes were so cheap and also always available for us to buy and sell.

“Now we make less profit because it is even expensive to buy from the fishermen and that has reduced our profits,’’ she said.

A customer at the market, who sells fish at Surulere Censors Market, Mrs Alomosan Adefowope, lamented the scarcity of fresh fish, saying many traders were switching to frozen fish owing to the problem.

“I came all the way from Surulere to this place to buy fish and at the end, I get less of what I wanted; when I get to my shop, I will get a carton of frozen fish to sell,’’ she said.

She urged the federal and the state governments to support fishermen with training and equipment to tackle the problem of unavailability. (NAN)