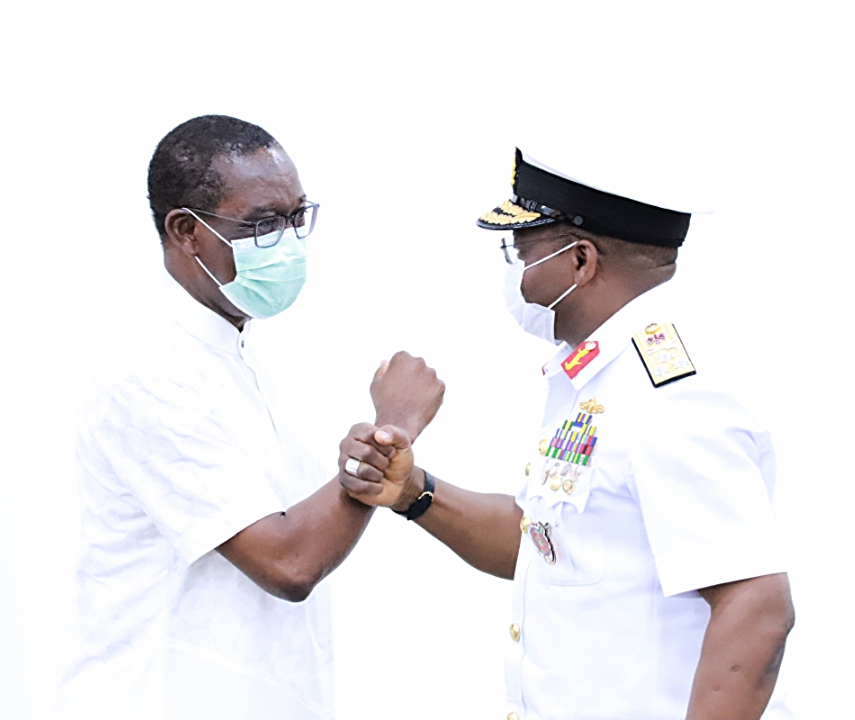 Delta Governor, Sen. (Dr) Ifeanyi Okowa, on Wednesday, called on the Nigerian Navy to strengthen its operational efficiency in ensuring that piracy and other unwholesome activities were nipped in the bud in the maritime sector of the nation’s economy.

Okowa made the call when he received the Chief of Naval Staff, Vice Admiral Awwal Gambo and his delegation at Government House, Asaba.

The Governor who said that he was impressed with the operational performance index of Naval personnel in the state, affirmed that with sustained surveillance and peace, Delta as a coastal state, will increase its contribution in crude oil production to the national treasury.

“I welcome you to Delta State. I want to thank you also for this visit. There is no doubt that Delta State is a very important coastal state, particularly because, it is a major producer of crude oil in our nation.

“I want to thank the Navy for the effort they have put in consistently in helping to secure our state and even working with other sister security agencies in securing even our lands.

“So, we want to appreciate you for the good work you are doing in the state. We are aware that you work with a lot of our people who assist in area of intelligence in being able to carry out your various surveillance activities.

“We are also grateful to the officers you have sent to us. They have been quite helpful and committed to their works both on land and in waters,” the governor said.

He assured the Chief of Naval Staff that his administration would continue to assist in making the job of Naval personnel both on land and in water easier through the provision of logistics, emphasising that the synergy among various security agencies has yielded positive results.

Governor Okowa said internal roads in Navy’s Logistics Command, in the state has been captured in the budget, affirming that the request for upgrade of facilities was being looked into.

On the Admiralty University, Ibusa, the Governor thanked the Navy for bringing the institution to the state, stressing that his administration would contribute towards the growth of the university.

“As for the barracks, we have spoken about it through your officer at the state security council. It is a contract awarded before we came in. I think we are sorting out the issue of re-costing after six years, so that the contractor can commence work very soon.

“The internal roads in Logistics Command would be done because there is a provision for it in the budget. The Commissioner for Works in charge of Rural and Riverine has visited the site.

“He has spoken with me recently and I know that the basic engineering measurements is already done. So, I do believe that it would be awarded before the end of this month.

“For the Admiralty University, we want to truly thank the Navy for bringing the University to our state. I will try to liaise with the University authorities to see what we can really do to support them,” he added.

Earlier, Vice Admiral Gambo said he was in Delta to familiarise with the state and to also, build on the existing cordial relationship between the Delta State Government and the Navy.

Vice Admiral Gambo said the Nigeria Navy was committed to the safety of the maritime space especially in ensuring that piracy and crude oil theft were stamped out from the maritime sector.

He disclosed that legitimate socio-economic activities will thrive as a result of the security that was being provided both on water and land in active collaboration with other sister security agencies.

The Chief of Naval Staff who said that Delta State covers huge national strategic assets in the nation, appealed to Governor Okowa to do more in the provision of facilities in various Naval formations in the state.

The Naval Chief outlined measures in place to stem the tide of piracy to include surveillance, response and maritime law enforcement, stressing that the approach has reduced criminal activities in the maritime space.

“Delta, as a coastal state, has a very long cordial relationship with the Nigerian Navy and of course, with our shared value, it is only apt to use this opportunity to consolidate on the already existing relationship between the Nigerian Navy, the government and the good people of Delta State.

“Delta State covers huge national strategic assets which is partly heart of the nation and therefore, its maritime space must remain safe and secured for economic activities to thrive for our common economic development and prosperity of the good people of Nigeria.

“The Nigerian Navy remains resolute to make sure that Delta State and its maritime sector remains secured within our ambit of responsibility to ensure that legitimate socio-economic activities remain unhindered by would be and existing criminals in the maritime space,” the Naval Chief said.